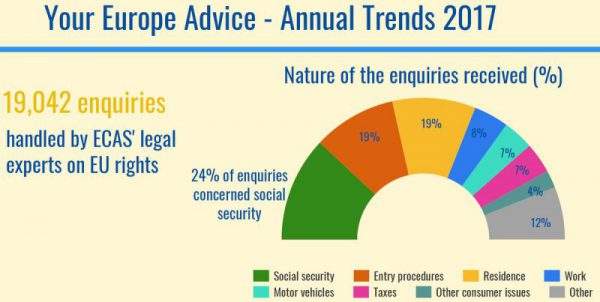 Topics related to social security rights continued to be the most problematic for EU citizens.

Enquiries related to residence rights increased by 3.4% compared to 2016. These largely concerned non-EU family members who are still experiencing difficulties when moving to another Member State.

These topics are summarized in ECAS’ recently published Annual Trends Report, which is based on all 2017 enquiries received by Your Europe Advice (YEA), an EU advice service on personal EU rights of citizens and businesses which ECAS manages under contract with and on behalf of the European Commission.

24% of these enquiries concerned social security and, more specifically, old age pension – a factor which is likely due to Brexit.

‘Pensioners are also important actors of freedom of movement inside the EU – not only workers and students. EU citizens (British or other) are now afraid that they will miss out on their pensions even though they made contributions while working in the UK’ says Claire Damilano, Senior Legal Manager at ECAS.

In addition, the trends have confirmed that it has become even more difficult for non-EU family members to enter and to reside in another EU country. Indeed, the report shows that enquiries related to entry procedures and residence are the second highest concern for EU citizens at 19%. An example of this is the UK: British authorities were reported to have denied an entry VISA to the non-EU wife of an EU national.

‘The difficulties encountered by the family members of mobile EU citizens reveal a worrying tendency, which threatens an important foundation of our societies – the right to family life’, says Assya Kavrakova, Executive Director at ECAS.

Many of the problems highlighted in the report derive from insufficient information, complex rules, a lack of coordination between Member States and public administrations not being aware of the rules. As a result a new communication from the Commission is necessary to clarify these issues and give clearer guidance to Member States.

View the infographic in English here, and in French here.