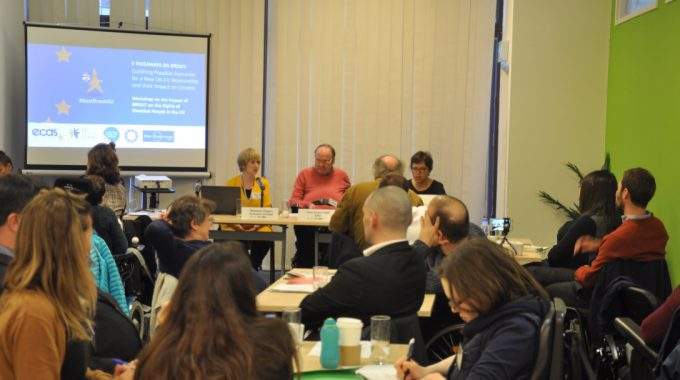 What are the instruments and initiatives that the EU has in place to protect and promote the rights of disabled people? How might Brexit affect these rights and access to EU funding streams in support of the disabled? How can we ensure that disability rights are not taken away from citizens in the UK after the Great Repeal Bill? These are some of the issues that were addressed during our workshop on disability rights in London on 20 March 2017.

The workshop was attended by 40 participants and followed by over 50 users online, and was jointly organised by the European Citizen Action Service (ECAS), the European Network on Independent Living (ENIL) and the European Disability Forum (EDF) as part of the project “Brexit Takeaways”. This project aims to raise awareness among citizens about the possible impact of different Brexit scenarios on their rights and advocate for the best possible deal for them before decision-makers.

The first part of the workshop featured Catherine Naughton, EDF Executive Director, who introduced the seminar and the aims of the workshop, Marta Pont, Membership and Outreach Manager and project coordinator of “Brexit Takeaways” at ECAS, and Law Professor Anna Lawson, Director of the Centre for Disability Studies at the University of Leeds.

Marta Pont presented the findings of ECAS’ study, which considers different Brexit scenarios and their impact on EU citizens’ rights. These include the right of entry and right to live and work in another EU country, the right to establish oneself professionally in another EU country, the right to non-discrimination and EU consumer and passenger rules, amongst others. The conclusion of her presentation was that there is no best alternative to EU membership under which all the different rights associated with EU citizenship can be fully secured. Therefore, a choice will have to be made during the negotiations about which scenario provides the widest guarantees to these rights and can, at the same time, be embraced by those who voted to leave the EU.

Her presentation was followed by an intervention from Professor Anna Lawson on the specific implications of Brexit for the rights of people with disabilities. She gave an overview of the different instruments at EU level that protect and support the rights of disabled people. These include the EU Disability Strategy 2014-2020 outlining 8 concrete areas for action, the UN Convention on the Rights of People with Disabilities (CRPD), which the EU is a signatory of, EU funding streams in support of disabled people, as well as the research activities and opportunities for engagement and exchange that the EU has established in the area of disabilities.

She then talked about possible ways to ensure that the disability rights which have been achieved within the framework of the EU are not withdrawn when the UK passes the Great Repeal Bill. She explained that some of these rights have been transposed into UK law as secondary legislation (i.e. statutes) instead of acts of Parliament (primary legislation), and this has implications as it enables the government to repeal them without involving Parliament. One way to make sure these rights are preserved after Brexit is to ensure that they are enshrined in primary legislation and that the Great Repeal Bill does not incorporate a so-called ‘Henry VIII clause’, which would empower the government to amend primary law without Parliament’s scrutiny. Other proposed solutions are to give greater political weight to the CRPD, to which the UK is a signatory, to ensure that accessibility requirements are embedded in UK law in the same way as they are mainstreamed at EU level, or to introduce an equality-compatibility check into any law that is passed in the UK.

Professor Lawson concluded her presentation with remarks of a more outward-looking nature, such as the interest of the UK in maintaining its involvement and cooperation in some EU networks on the topic of disabilities within its future relationship with the EU. The importance of securing the rights of EU workers in the UK who are carers or personal assistants was also mentioned.

The second panel featured Baroness Jane Campbell, Member of the House of Lords, and Maureen Piggot, President of Inclusion Europe. Their interventions were followed by a debate with the audience, which was moderated by John Evans from ENIL’s Advisory Council.

Baroness Campbell warned about the lack of knowledge among UK parliamentarians about how Brexit will play out and how it is going to impact on the rights of disabled people. She regretted the lack of briefings on this and emphasised the need for parliamentarians to be proactive and find out information by themselves, with the government seeking to limit their involvement in the negotiations as much as possible. She encouraged disabled people and DPOs to contact their MPs and Lords, as well as the government, to raise their concerns about Brexit, so that they can be taken into account when negotiations start.

Maureen Piggot focused her intervention on the impact of Brexit on the specific case of Northern Ireland as a special UK jurisdiction sharing a land border with the EU. She referred to the EU’s role in appeasing identity tensions in Northern Ireland and in supporting the peace process, as well as to the different funding streams under the EU Structural Funds and Interregional funds, which have been providing crucial support for access to employment, community development and capacity building, as well as inclusion and understanding in Northern Ireland. As a disadvantaged region, Northern Ireland is expected to suffer seriously if these funding programmes are removed.