ECAS Highlight of the Week – Towards a Citizen-Centric European Union 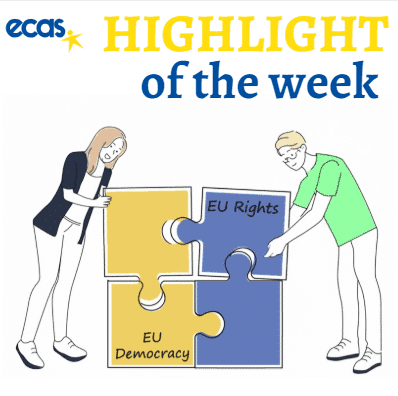 In the last several years, there has been a growing feeling of disconnect between the European Union and its citizens. On the one hand, people have been questioning the Union’s legitimacy, often expressing that their voices are not being heard or that they matter. On the other hand, the EU has not been visibly doing much to convince them of the opposite. And with Eurosceptics and populism movements being able to comfortably settle in-between, there has been a growing threat to the sustainability of the European project as such.

The ongoing COVID-19 crisis has further highlighted this disconnect in European solidarity and the inequalities in the political system. However, the response to its impact, based on recovery AND reconstruction, is an opportunity to effectively address these issues. Doing so must involve all stakeholders – from the European institutions and Member States to businesses, civil society organisations and citizens themselves. The latter group needs to be presented with meaningful methods for contribution so that their relationship with decision-makers becomes more of a partnership for the co-creation of future policies.

Drawing on its expertise and extensive research done within the framework of various projects, ECAS has formed a set of eight recommendations to stakeholders, which we believe will bring us closer to a ‘citizen-centric European Union’. The recommendations cover issues that fall under our two focus areas, EU Rights and European Democracy.

Each recommendation will be accompanied with a video explaining the background and reason for its inclusion. In this edition of ECAS’ Highlight of the Week, we would like to introduce the first video in the series, offering insight into the following:

“ECAS calls for the EU institutions and national and regional stakeholders to foster the development of a European public sphere and restore the public space of dialogue and debate in local communities, especially in non-metropolitan and rural areas in order to help overcome the feeling of abandonment and disconnect among citizens and reduce the scope for populism. This involves reinforcement of European political parties, civil society organisations and citizens networks, as the core foundation of representative democracy.”

Watch the explanatory video below and join our call!

Previous editions of ‘ECAS’ Highlight of the Week’:

08.06.20 – Many of the obstacles to EU freedom of movement rights can be addressed through effective civil servant training. This need gave birth to the Improving Inclusion of EU Mobile Citizens(IMPEU) Massive Open Online Course, which has now been launched! Through engaging, high-quality courses, participants will be enabled to better serve the EU mobile citizens in their country.

02.06.20 – In an article published on the Friends of Europe website, ECAS Executive Director Assya Kavrakova reflects on the impact COVID-19 has had on freedom of movement in the EU – the fundamental freedom most affected by the current crisis. In light of the developments highlighted in the article, ECAS is launching an in-depth research project to evaluate: