Home>News>The Impact of Populism on European Institutions and Civic Society: Bridging the Gap between Research and Practice

The Impact of Populism on European Institutions and Civic Society: Bridging the Gap between Research and Practice 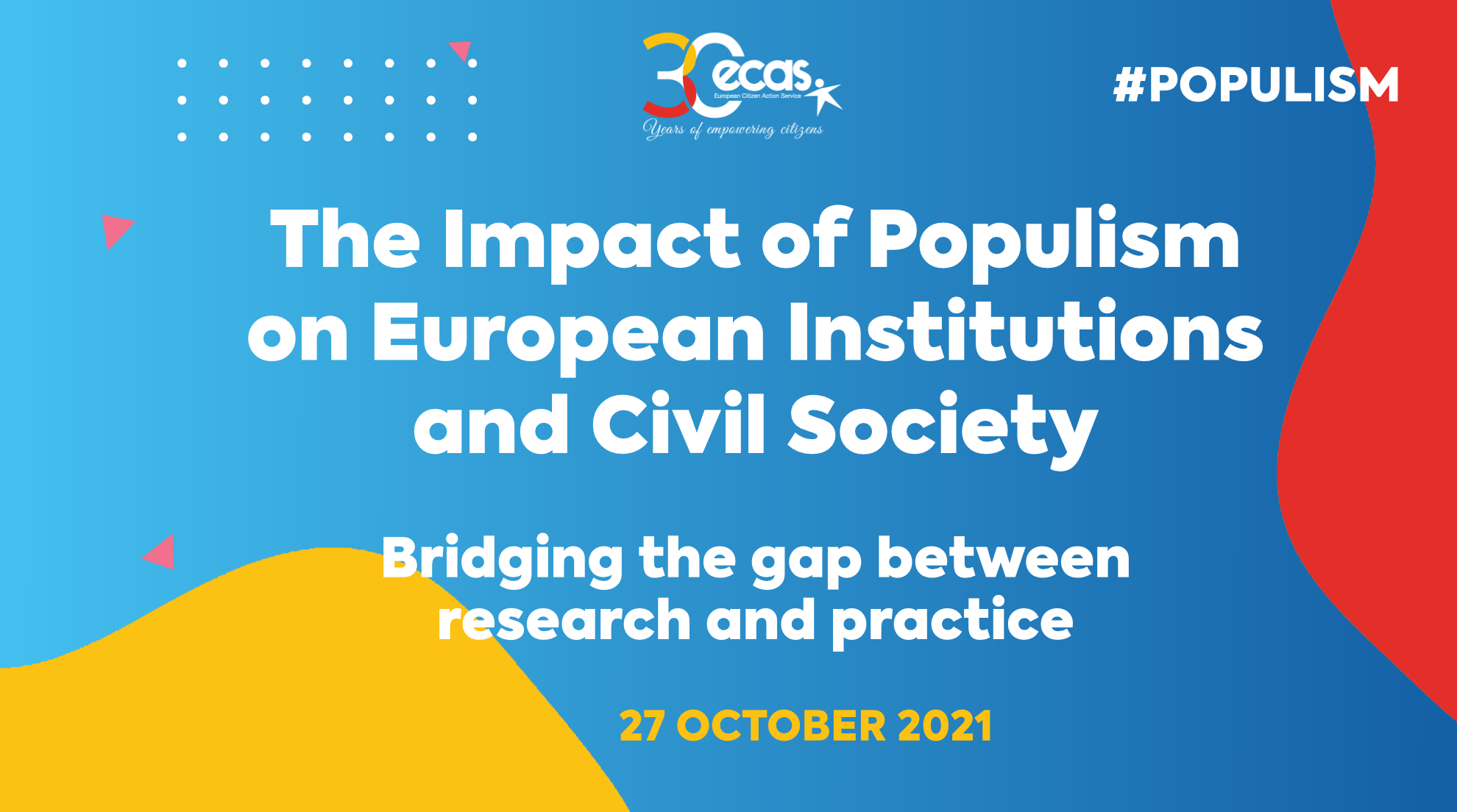 On 27 October 2021, civil society representatives, academics and policy makers convened to discuss the findings from the newly published book, “The Impact of Populism on European Institutions and Civic Society“. The purpose of this conference was to continue the debate on populism and to understand its impact on European institutions and civil society. The event connected research with tangible action on the ground.

Carlo Ruzza, Professor of Political Sociology at the University of Trento, Italy highlighted that populism is not just a one-time distinctive event. It is a long stream of successions over the past 30 years that change over time. Professor Ruzza also stated that to understand populism, one must also understand the reactions to populism. Populism and ‘anitpopulism’ are symbiotic.

Carlo Berti, Research Fellow at the School of International Studies, University of Trento, Italy emphasised that the European Commission views populism as a threat to European values and the European project. In order to fight populism, Mr. Berti states that the EU institutions must find a common vision that unites EU citizens and makes the citizens feel secure with the EU institutions.

Pierluigi Brombo, Head of the Foresight, Studies and Assessment unit at the European Economic and Social Committee (EESC), explained four ways in which populism can negatively impact Civil Society Organisations (CSOs). The first is through governments and EU Institutions by limiting funding and financing, an increased regulatory environment and by direct attacks to CSOs. The second is through negative public discourse and smear campaigns on CSOs. The third is through threatening CSOs safe space and the fourth is by simply by-passing CSOs thus limiting CSO’s impact on society. Mr. Brombo concluded by emphasising that CSOs can and must fight populism. CSOs can fight populism by promoting values in common with EU Institutions, civic education, and increased engagement.

Paolo Cossarini, Postdoctoral Researcher at the Department of Culture & Learning, Aalborg University, Denmark stated that populism also emerges from civil society. It is a phenomenon that exposes the inequalities and malfunctions of politics. In order to fight populism, Mr. Cossarini explains that we must reinforce the structures of civil society organisations.

Assya Kavrakova, Executive Director of ECAS, states that one way to respond to populism is to strengthen the European public sphere. This can be achieved through (1) safeguarding the rule of law, (2) fostering political & democratic innovation in the eurosphere, and (3) sustaining public spaces by supporting civic actors, civil education and encouraging interactions.

Zsolt Boda, Director General of the Centre for Social Sciences of the Hungarian Academy of Sciences Centre of Excellence and principal investigator of DEMOS (H2020), emphasised that populism is a social phenomenon and that reactions and responses to populism should be mapped out. This will help to find good practices in responding to populism.

Kalypso Nicolaidis, professorial Chair of Global Affairs at the EUI School of Transnational Governance in Florence, highlighted that there must be a multiplicity of viewpoints. There must also be a formative relationship and discussion between transformative eurosceptics and transformative elites. Ms. Nicolaidis concluded that the EU must ground European values at the local level to protect such values from populism.

Salvatore Finamore, member of the Analysis & Research team of the General Secretariat of the Council of the EU, suggested there should be future-oriented research to investigate under what conditions populism could grow, decline, transform or be integrated into existing political structures. Mr. Finamore used an input-output model of the political system to highlight the importance of CSOs to European democracy and to consider possible reasons for shortcomings of populist governance.

June Bedaton from the the EESC Group on Fundamental Rights and Rule of Law and Bruce Edmonds, Director of the Centre for Policy Modelling at the Manchester Metropolitan University and PACE (H2020) coordinator, both emphasised that populism grows among citizens who feel excluded or forgotten by their political institutions. This is why it is important to ensure representation of underrepresented groups.

To participate in further discussions and research on populism, visit DEMOS Crowdsourcing platform, where you can give your opinion and recommendations on three main topics related to populism: (1) participation and minorities, (2) minorities and (3) media. Besides, ECAS has created the Civil Society Hub for actors addressing populist movements, bringing together a wide range of actors working on safeguarding liberal democracy. Find out more about it here.