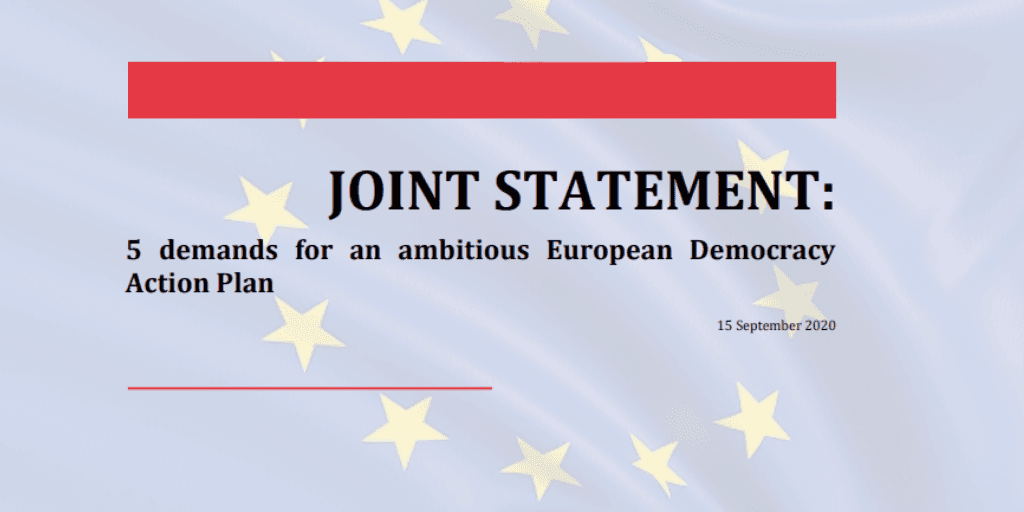 This joint statement was coordinated by the European Partnership for Democracy.

Democracies in Europe have been faced with numerous challenges over the past decade, including increasing political polarisation, closing democratic space, increased mass surveillance, popular disillusionment with representative politics and democratic institutions, and increasingly assertive authoritarian global players. There is widespread recognition of the fact that democracy is under pressure across the world.

The COVID-19 pandemic has exacerbated many of these trends and continues to test different elements of democratic politics across the continent. At the same time, the changes brought about by the pandemic have also propelled many democratic reform efforts—in civil society, political opposition forces, and the digital sphere. Amidst the socio-economic and political fallout from the virus, the EU commitment to democracy is more important than ever.

As a diverse coalition of civil society, professional and intergovernmental organisations, we call on the European institutions to develop and implement the European Democracy Action Plan along the following lines:

1. Ambition: Match the ambition of the European Democracy Action Plan with the magnitude of today’s challenges and build opportunities to innovate democracy.

As the trend of autocratisation has been exacerbated by the pandemic and major geopolitical shifts and economic turbulence are likely to mark the next decade, European leadership on democratic recovery today will be essential for a more robust democratic world tomorrow. The European Commission must seize the opportunity of the European Democracy Action Plan with ambition and leadership.

You can also access the EDAP input paper, to which ECAS and 47 other organisations working on democracy, human rights, media and the rule of law have contributed to.