Home>News>ECAS Highlight of the Week – A Vision for Europe: The European Democracy Action Plan

ECAS Highlight of the Week – A Vision for Europe: The European Democracy Action Plan 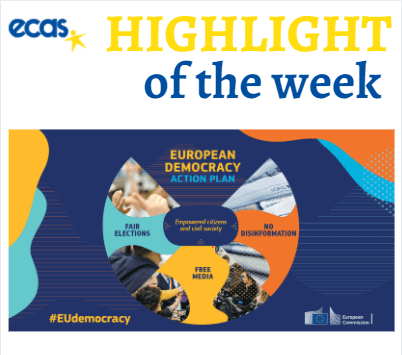 Though it has a set definition, ‘democracy’ can take on many different meanings for people. To diversify it farther, the traditional methods of putting it in practice are being revolutionised and expanded with the rapid evolution of technology.

So…what do we want out of democracy? That is the fundamental question, as the answer is what will design the course to come. It is also through the prism of this question that ECAS reviewed the newly-released European Democracy Action Plan (EDAP). After months of collaboration and consultations, the European Commission published today its plan to “make our democracies more resilient, to ensure that citizens can participate in democratic system through informed decision-making, and ensure increase of confidence in the democratic process”.

ECAS contributed to the consultation, based on our vision of a citizen-centric European Union. Our input focused on harnessing the potential of digital tools to increase EU citizen participation in the decision-making process, while also addressing the inevitable challenges that come along, such as online disinformation. The below ECAS recommendations were largely reflected in the EDAP, signaling the EC commitment to close the gap between the EU and its citizens.

An important societal transformation is taking place throughout Europe and across the world.  On the one hand, a new deliberative-collaborative e-democracy model is emerging which can contribute to a more open and inclusive form of policy-making by involving citizens through the use of Information and Communication Technology (ICT). On the other hand, Europeans are confronted with increasing threats such as populism and online disinformation that undermine the foundations and institutions of our democratic societies.

ECAS believes that the EU should explore more fully the potential of ICT in reducing the gap between political elites and citizens in order to create an engaged citizenship through civic tech. Decision-makers at all levels should complement representative democracy with collaborative elements of participatory democracy so to transform their relationship with citizens into more of a partnership, especially for the co-creation of policy. This should especially be made available at the EU level for all areas of EU action that tackle transnational issues, challenges and risks that, by their nature, cross national boundaries and cannot be addressed by one member state alone such as the freedom of movement, climate change, energy, organized crime etc.

The public consultations process of the European Commission does not always allow for the generally high level of interest from civil society to be involved in shaping EU policies to translate into meaningful and impactful input. This stems, in part, from the highly technical nature of the procedure which is far more likely to be followed by organised interest. Therefore, ECAS asks the European Commission to divide the existing online consultations on EU policy-making into two parallel channels: one which is designed to better gain the views of organised interests and one which is tailored to collect the insights of citizens through crowdsourcing mechanisms. Our expertise on digital democracy can testify to such methods’ ability to contribute to a more open, transparent and inclusive form of policy-making.

Using the Conference on the Future of Europe to pilot such democratic innovation methods of citizens engagement should be a priority. ECAS further detailed five phases we believe are essential for it to be a truly effective and successful process.

We believe (and expressed) that the EU should promote a holistic approach with positive measures to address disinformation, such as investment in quality journalism, a plurality of information sources, the regulation of online manipulation business models, requirements for responsible platform design and support to fact checking organisations.

Different platforms employ different standards of transparency, fact-checking mechanisms and alert features. This results in an online environment in which some platforms are better equipped to flag disinformation and reporting sponsored content than others. We believe that it is necessary to put in place a series of recommendations and guidelines addressing the inconsistency between transparency, fact-checking mechanisms and alert features available across platforms. Such recommendations, or guidelines, should be available for the platforms to implement more consistent policies across different social media platforms.

Unlike broadcast political ads shown to the wider public, online ads are tailored to specific homogenous groups of people, which can segment and polarise the voter base and distort political debate. Advertisers can purchase exorbitant amounts of ads and flood people’s social media feeds, thereby buying themselves space in public policy and political debates

The lack of transparency of which ads are shown to whom, why, and who has paid for them, further creates a situation where anyone – from a political party and interest group to a foreign advertising firm like Cambridge Analytica – can distort political debate and easily evade public interest scrutiny. This threatens the credibility of our electoral processes, and ultimately the legitimacy and representativeness of our democracies. At the source of these problems lies the lack of transparency offered by digital platforms such as social media sites, video apps and search engines. While some platforms have found ways to provide some transparency on political ads (partly due to pressure by the European Commission), their voluntary measures fall short of providing meaningful transparency. One crucial weakness of the status quo is that it leaves platforms to decide what is and is not political advertising – and thus, what advertising will and will not be subjected to platforms’ transparency regimes. To avoid this issue and to recognise the kind of behavioural targeting and algorithmic delivery that underlies all types of social media advertising, it is necessary to require meaningful default transparency for all ads.

ECAS is pleased to see this recommendation was taken aboard in the EDAP by:

In follow-up, ECAS looks forward to participating in an online conversation with Vice President of the European Commission for Values and Transparency, Vera Jourova, during which we will seek to understand if the EDAP can deliver on its promises. The event can be followed live here, starting at 11:00 (December 4th).

Continue the conversation with us next week during the European Public Communication Conference, taking place on December 7th-8th. ECAS Executive Director, Assya Kavrakova will be part of a panel of experts to discuss what works, and what does not, when it comes to citizens’ engagement in decision-making.

Discover the ways citizens can be involved in the Conference on the Future of Europe!

Additional background to the article:

In early September, ECAS joined 45 other CSOs in calling for the ambition of the European Democracy Action Plan to match the magnitude of today’s challenges and build opportunities to innovative democracy. The statement lays out five demands, which can be viewed here, and are summarised below:

–> In other words, European democracy faces unprecedented challenges at present with the rise of populism and authoritarianism across the continent and the COVID-19 pandemic. Although proposing ambitious new legislation and reforms may be politically costly, they are integral to creating a European democracy resilient enough (which citizens can trust) to withstand future crises.

–> Much in the spirit of the point above, addressing/tackling current challenges to European democracy isn’t sufficient to create a sustainable future for it. The Action Plan needs to be forward-looking and seek to tackle contemporary problems by strengthening civic space, promoting inclusive and participatory decision-making and upholding the rule of law and respect for fundamental rights, amongst many other points.

–> Moreover, minorities and marginalised groups of society must be meaningfully involved and represented in said processes with gender equality upheld.

–>The only means of overcoming authoritarian and populist narratives is to re-shape the narrative surrounding European democracy via story-telling. The Commission must play a starring role in that.