ECAS Highlight of the Week – Four Types of Populism Across Europe 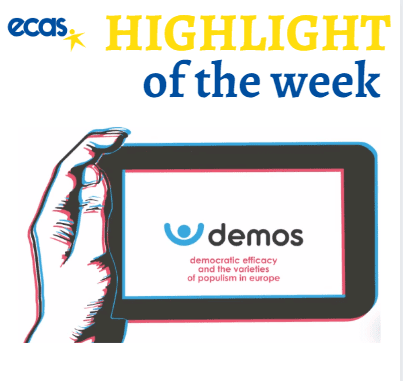 The topic of populism is increasingly present in media coverage and academic discussions – a response that reflects its rapid rise throughout Europe. And though still largely ambiguous as a concept, its impact is very real. At present there are many examples of how powerful it can be in influencing the political course in different countries.

Given ECAS’s line of work, addressing this phenomenon is not only inevitable, but also necessary. ‘Understanding populism’ is one of the three pillars of our European Democracy focus area and we carry out various in-depth work to investigate how it affects our societies. One such project is the Democratic Efficacy and the Varieties of Populism in Europe (DEMOS), implemented by a consortium of 15 institutions. Within its framework, partners recently released new research identifying four types of populism in political parties and movements in Europe – radical left-wing, right-wing, illiberal and anti-establishment.

The study, which investigated 17 populist parties and movements, fills a void in research on comparative party populism and offers a unique insight into their social, political, and historical developments. According to the findings, except for the French Front National/Rassemblement National (FN/RN) and the Hungarian Fidesz parties, most populist parties are young: they have been established in the 21st century. Several parties developed a populist appeal over time. An example is the Alternative for Germany, which started as a single-issue party until it developed a strong anti-establishment appeal. 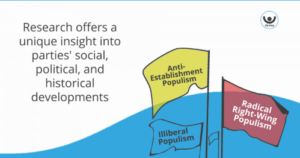 You can view the full findings of the research here.

Led by the Hungarian Academy of Sciences, DEMOS is carried out by 15 partner institutions in Europe, including ECAS, and involves 10 disciplines. The project investigates the phenomenon of populism through the lenses of democratic efficacy, looking at its historical, cultural, and socioeconomic roots and impacts.
Exploring different angles of populism is of key importance. It is precisely because of its complexity and many dimensions that tackling it can be difficult. The factors behind its rise differ not only from country to country, but also within countries themselves, across social class, economic status and so on. As ECAS Executive Director Assya Kavrakova highlighted in an article published in the Rural Connections magazine, populists adapt their approach to the characteristics of the region they are in. Their main tactic, however, is the same –  the manipulation of popular fears:

“For middle-income groups, for example, the fear of loss of status is the strongest driving factor towards populist parties, while in lower income groups the key factor is the more direct fear of loss of jobs and income. Similarly, the rejection of migration can be due to cultural factors, but also to fear of job losses or job competition”.

You can read the whole article here (page 13). 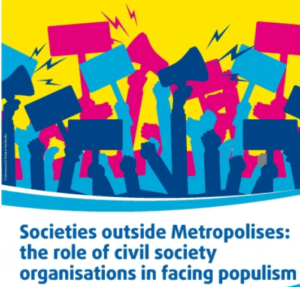 The article is based on insight from the study ‘Societies outside Metropolises: the role of civil society organisations in facing populism’, commissioned by the European Economic and Social Committee’s Diversity Europe Group and carried out by ECAS. Looking at eight non-metropolitan areas in four EU Member States with high populist votes – Austria, Italy, Poland and France – the study aimed to better understand the factors influencing citizens’ choices in favour of populism and whether CSOs in the regions are equipped to counter it. You can access the full study, as well as an executive summary, here.