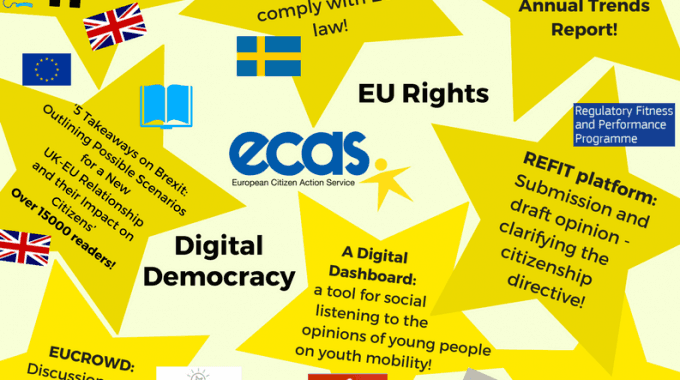 The harder the challenge, the stronger the outcome

Over the past year political turmoil has posed a great deal of uncertainty not to mention significant challenges for the issue of citizens’ rights throughout Europe.

Despite these crisis-driven times the length of our 2017 activities proves ECAS is not merely able, but extremely well-equipped to meet these challenges. With the benefit of hindsight, it is apparent that the political challenges faced at EU level have strengthened ECAS’ work.

ECAS believes in empowering citizens to strengthen the European project, however the mission is beyond merely promoting and defending citizens’ rights. ECAS has been developing and supporting concrete mechanisms for to encourage citizens’ and citizen organizations’ democratic participation in the EU.

In 2017 ECAS continued advocating for stronger support in the field, awareness raising on e-participation, and an efficient revision of the ECI.

The Digital Dashboard featured among ECAS’ key Digital Democracy milestones – a tool for social listening to the opinions of young people on youth mobility.

ECAS can also vouch for the roaring success of Digital Democracy Day 2017 which counted 110 participants and 8000 following the Facebook livestream.

Almost all of the six recommendations put forward in 2016 through the REFIT platform for Better Regulation by our Executive Director Assya Kavrakova, were taken into consideration in the new revision of the ECI regulation proposed by the European Commission. In the meantime, the ECI Support Centre continued to support ECI organisers in 2017 and ECAS joined the ECI Rescue Team to monitor the revision of the ECI regulation with other organisations.

Citizens’ rights preservation in the post-Brexit period has been one of ECAS’ top priorities.

To develop awareness and support the fair treatment of EU citizens in the UK and UK citizens in the EU, ECAS implemented the project ‘5 Takeaways on Brexit: Outlining Possible Scenarios for a New UK-EU Relationship and their Impact on Citizens’. The events (held in London, Belfast, Gibraltar and Brussels) counted high attendance and attracted substantial media attention, and the study itself was viewed by over 14,980 people.

With similar aims in mind, ECAS followed up on this successful project by launching the Citizen Brexit Observatory (CBO), in collaboration with Sheffield University and Law Centres Network (LCN).

Verifying the correct functioning of free movement rights has remained a stable aim in ECAS’ daily work in other EU countries. The EU Rights Clinic and ECAS in cooperation with Crossroads Göteborg submitted a complaint to the EC related to a breach of Free Movement Rules by Sweden on behalf of 285 individuals and a petition to the European Parliament.

2017 remained a busy year for our Your Europe Advice legal experts, who replied to 19,042 enquiries from all 28 EU countries.

For more details do not hesitate to consult ECAS’ latest activity report.

Your Europe Advice is an EU advice service on personal EU rights of citizens and businesses which ECAS manages under contract with and on behalf of the European Commission.