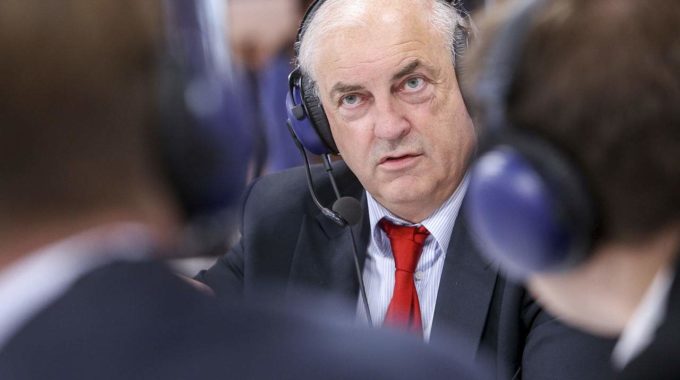 On December 11, the University of Sheffield’s Sylwia Lipinska, co-author of ‘Brexit and Loss of EU Citizenship: Cases, Options, Perceptions‘, spoke to Luxembourg MEP Charles Goerens about citizens’ rights post-Brexit, the Divorce Report and Associate Citizenship of the EU for UK nationals. The interview was conducted as part of the Citizen Brexit Observatory.

Sylwia Lipinska: The Brexit Divorce Report is aiming to guarantee the rights of EU citizens and UK nationals who have exercised their right to free movement. Some have argued that the negotiations (and now the Divorce Report) have focused excessively on ‘mobile’ citizens and that ‘static’ citizens have been largely ignored. This is problematic, as there are many UK nationals who will not have a choice before the UK’s withdrawal to move to another EU Member State, either because of their young age or for personal reasons. Do you believe that there should be a shift to also include ‘static’ UK nationals in the next stage of negotiations?

Charles Goerens: We must make a distinction between a Divorce Agreement, on the one hand, and the future relationship on the other. Concerning the Divorce Agreement, we could only look into the situation of EU nationals living in the United Kingdom and UK nationals living in the 27 other Member States of the European Union. Concerning the rights of those four million citizens – one million Britons and three million EU nationals – as far as I can see some progress has been made and this progress seems to me to be enough to move to the second step. As far as the future rights of UK citizens and EU nationals are concerned, I think that this can only be part of the second agreement. Those provisions must be laid down in the future agreement.

We can still, and we will have to, modify the treaty in several aspects after Brexit, because the situation will be a new one and this situation will no longer be, concerning certain aspects, in line with the provisions laid down in our treaty. That’s my principle view on that and I am still in favour of acting towards changing the treaty in order to get the possibility to have Associate Citizenship. But we will need a majority in the Constitutional Affairs Committee in the European Parliament, we will need agreement among the 27 Member States and we will need the idea to be accepted by the United Kingdom.

SL: Would there be any time limit for UK nationals to acquire Associate Citizenship post-Brexit, or would it be open to them for an unlimited period of time?

CG: In my view, it was only an idea. It’s a weak position unless you can get the majority to push it. In political terms, this has not been the case so far. In my personal view, EU Associate Citizenship was an offer to those British Citizens willing to get this citizenship. The first step to get it is to change the treaty. My personal suggestion was to give European Associate Citizenship to those British citizens willing to have it, but I can imagine that there are people opposed to European fundamental values who are not willing to further support European fundamental values. It is a selective attitude, if you want, with respect to those willing to have a close relationship with the European Union. Unfortunately, it was misunderstood and misinterpreted. I am a politician, therefore I am still endorsing it. We should never say no.

SL: Freedom of movement is, for many, the most important right. The question that arises from the Divorce Deal is whether any rights will be restricted. For example, whether UK nationals resident in another EU Member State will be able to travel freely between the different Member States and whether their rights will be covered by the Withdrawal Agreement. It seems as if, based on the Divorce Deal, this would not be the case. Do you believe that further negotiations and agreements will try to push for UK nationals resident in another EU Member State to have freedom of movement across the EU after Brexit?

CG: What we can say today is that the rights of EU nationals living abroad and UK nationals living in the EU are guaranteed, and this includes free movement. In addition to that, you are right to mention this problem. What about the rights of those deprived of free movement? It depends on the ongoing negotiations. We must have an agreement among the 28 – 27 on the one hand and the United Kingdom on the other. If you consider, for instance, citizens of Iceland, Norway, Switzerland, they have free movement because they are a part of the Schengen Agreement, and that you can do without treaty change. You can enlarge the advantages of the Schengen Agreement, free movement, for instance, to those citizens. But will the United Kingdom want to have this close relationship? I don’t know. I am one of the sceptics, given the fact that the referendum raised the question of secure borders. In this regard, I cannot imagine a huge majority of Brits in favour of such a close relationship. That depends on the United Kingdom. I think that if a proposal comes from the United Kingdom to have such a close kind of relationship, you can have it by still belonging to the European Single Market. That’s one possibility.

SL: There were criticisms put forward that providing Associate Citizenship to UK nationals could encourage other countries to leave the European Union, in order to have the same comfort, the same advantages, without having the same duties.

CG: I am not sure, because membership of the European Union is of tremendous advantage for countries such as Poland, the Czech Republic and Slovakia. I am sceptical that they would take it as an incentive to leave the European Union if they would have the right to free movement. I cannot imagine it, because they have, beyond that, so many advantages. They have access to the free market and are recipient countries of European funding, for example. Coming from irrational thinking, it’s imaginable, but if you take this decision by referendum, then you can never say what could be the outcome, at the end of the day. The Brexit campaign was a very irrational thing. There was no possibility to discuss a problem without being disturbed by fake news. It is up to the governments, to the ruling parties, to decide in that case. This view is, in my regard, unimaginable. In other words, I think this criticism is not justified.

SL: In your opinion, is there a specific group of UK nationals or EU citizens who will be affected the most by Brexit?

CG: For EU nationals living in Britain and Britons living in the European Union, in my view the damage can be limited. I don’t know what, in detail, could be difficult for citizens, but speaking generally, I think they have got a fair deal. I think that Theresa May and the EU side have concluded a fair deal.

Concerning the other people, not a part of this group of people, the other 60 million in the United Kingdom, and the 450 million in the rest of the EU, we are only at the end of the beginning. The most important and complicated part of the negotiations – the worst part – is still to come. We have fulfilled a depth of preconditions in order to move forward. That is very helpful but nevertheless you cannot ever say what will be the outcome at the end of the day.

SL: There is an argument that we need a judicial body that will guarantee the compliance of the UK and EU Member States with the Withdrawal Agreement, as well as interpret the provisions contained within it. Some argue that the Court of Justice of the EU (CJEU) is suitable for this, others have argued that there should be a new body created for that agreement. What is your opinion on this?

Concerning the future relationship, that also must be a part of the additional agreement, if the future negotiating parties want to go beyond the existing situation. That must be a part of the future relationship. It has to be the European Parliament that ratifies the Divorce Agreement, which needs to have the provisions we have been discussing since the beginning of our interview. But all the other aspects concerning the future relationship will be ratified by the Member States, and that’s quite different. That’s one of the reasons why we cannot be very outspoken about that for the time being. But this will become a little bit clearer after the next European Council, which will take place in Brussels on 15 December.

SL: Is there anything in particular that concerns you about the Divorce Report?

CG: My first reaction was that it is a fair deal. I must check it to see if there are any precise details putting into question my first reaction, my first comments. But as I see it, it can be approved by the European Parliament. We can give the green light to Barnier and the Member States to move on to the second part of the negotiations.