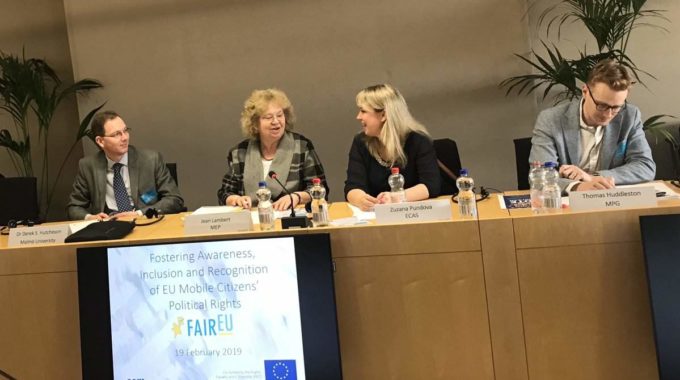 The political participation of mobile EU citizens remains limited due to obstacles they face and low political awareness. Their involvement could, however, be enhanced if the obstacles were tackled and concrete facilitating measures were introduced. That was the conclusion of the workshop Fostering Awareness, Inclusion and Recognition of EU Mobile Citizens’ Political Rights, which took place on 19 February in the European Parliament. “The right to vote is extremely precious”, said Member of the European Parliament (MEP) Jean Lambert.

MEP Jean Lambert, who hosted the event, opened the discussion by explaining that there many obstacles that EU mobile citizens face when trying to exercise their political rights, including lack of information on registration procedures or unclear eligibility rules. She said that raising awareness on political rights among EU mobile citizens is crucial and people should be given a voice in the country they live in.

Dr Derek Hutcheson, Associate Professor in Political Science of Malmö University, provided the participants with a statistical overview of political participation of EU mobile citizens. He explained the challenges he encountered when trying to make an inventory of the registration rates in all EU Member States. Dr Hutcheson also explained that voluntary registration on the electoral roll is very low, and he said that automatic registration could improve political participation of mobile EU citizens.

Dr Alina Ostling, Researcher at the European University Institute, delved deeper into the obstacles to political participation. She said that there are 15 million mobile EU citizens of voting age but they have low awareness of their electoral rights. In order to improve political participation among this group, she recommended an automatic or quasi-automatic registration process for the local elections. Where that is not possible, online registration should be made available, she added. She also argued in favour of registration deadlines being closer to the election date and explained that EU citizens may be more encouraged to vote if they receive information in English or their native language.

Thomas Huddleston, Research Director at Migration Policy Group, presented the results of VoteBrussels campaign which targeted EU mobile citizens living in Brussels, by encouraging them to vote in the local elections in October 2018. He explained that the campaign contributed to an increase in the voter registration rate which doubled in just five months, and 25.000 new voters were registered. He also gave an advice on how to make similar campaigns successful by explaining it is necessary to have a group of committed volunteers who can reach voters at various social and cultural events.

Anna Zaremba, EU Rights Coordinator at European Citizen Action Service, presented the initial findings of the crowdsourcing exercise which aimed at analysing citizens’ opinion on obstacles to freedom of movement and political participation. According to the 330 respondents, the main obstacles to political participation are lengthy and cumbersome registration procedures and lack of correct and clear information on the procedures and eligibility requirements. Interestingly, over 50% of respondents declared that they involve in non-electoral political and civic activities. Anna concluded by saying that the majority of the citizens (around 80%) agree that obstacles faced by mobile EU citizens may contribute to their disinvolvement in local political life.

Harry Panagopulos, Legal officer at the European Commission, spoke about the Report on the right of EU citizens to vote and stand as candidates in municipal elections, which the European Commission published in January last year. He also found the crowdsourcing’s results on mobile EU citizens’ involvement in non-electoral activities particularly interesting, and said that it is a ‘challenge to translate public activity into voting’. He also said that there are many interesting projects on political involvement of EU citizens and more should be done to disseminate and share the results.