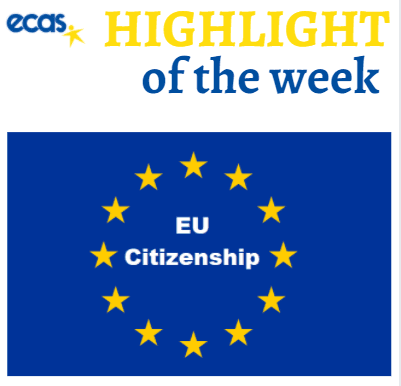 We do not give it much thought, but citizenship has a huge influence on our lives. It goes beyond owning a ‘passport’ to the protection, rights and freedoms offered by a sovereign state; it also creates a feeling of community and pride. But when speaking of EU citizenship, the latter becomes difficult to apply, as many feel disconnected from the European Union. People struggle to embrace it as an extension and complimentary to their national citizenship, mainly associating it only with open borders and freedom of movement.

Granted by the 1992 Maastricht Treaty, EU citizenship was introduced as an evolutionary concept by the Spanish government at the time. The idea was not to ground it to stationary conditions, but rather allow it to evolve alongside the circumstances and advancements of the time. This historical context has been recently triggered into play by the Covid-19 pandemic. The crisis has clearly illustrated that it is in danger of being outdated and what the next step of evolution should be so to avoid that from happening –  moving towards a digital EU citizenship. This upgrade will not only allow people to be more engaged as European citizens, but could perhaps also build the feeling of belonging that is currently largely lacking.

During the 2020 State of the Union speech in September, European Commission (EC) President Ursula von der Leyen shared her vision for the European digital decade ahead and of a digital identity for all EU citizens. What this means (and how we hope it will pan out) is that people would be able to access any service online, which in most Member States you can increasingly already do so. We do not need to look far for a strong example of digital citizenship and its benefits –  in Estonia, people can do 97 percent of things online, with the exceptions of getting married or divorced, and buying real estate. Similarly, dematerializing and digitalising our EU citizenship will bring everyday value to people and will enable them to be active citizens at all times, regardless of where they happen to be. 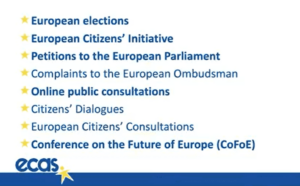 Participation is the other side of the “active citizen” coin. Citizenship is not exhaustive in its catalogue of rights nor casting a vote every four years. It must be exercised through various formal and informal channels, and the digital space offers many such possibilities here too. This is why the nexus between information and communications technology (ICT), digital democracy and democratic innovation needs to be fully explored and utilized . The truth is that ICT is a tool, and tools do not create miracles, PEOPLE do. There is a need to re-think the efficiency of our democratic model and make it fit for purpose for Europe’s Digital Decade. This can be done by complementing representative democracy with methods of co-production of policy decisions with citizens in-between elections. More collaborative models of citizens’ engagement in the democratic decision-making is the only way to narrow the space for populism. That is why the announced ‘secure European e-identity’ and the mentioned ‘digital public service’ during the State of the Union address should serve as the basis for a much more robust democratic transformation. If “any citizen can use (this European e-identity) anywhere in Europe to do anything from paying your taxes to renting a bicycle”, it should also be the basis for active digital citizenship and participation as far as there are structured mechanisms to do so.

Similar ideas were also discussed during a Europe for Citizens webinar that took place on November 18th. Covering e-participation at EU level and strategies to integrate existing channels of participation into a project, ECAS Citizens’ Rights Training Coordinator Petar Marcovic focused on the two dimensions that e-democracy is comprised of. One is e-government, a top down approach of governments trying to digitalise most of its services to citizens and provide them in an effective, transparent, accessible way. The second is e-participation, a bottoms up approach to  citizen involvement in decision-making. On an EU level, the unique democratic innovation is undoubtedly the European Citizens’ Initiative (ECI) as the first trans-national instrument of participatory democracy, which allows the European citizens to shape the EU policy agenda. To further make the ECI more accessible to citizens, it comes hand in hand with a multilingual online collaborative platform (the Forum) that supports organisers of initiatives at all parts of their journey.

There are many other successful examples of democratic innovation, on a national level, which rely predominantly on online collaboration. Latvia has an on-line platform – ManaBalss – for crowdsourcing legislation that is visited by over 70% of Latvian citizens annually, helping to shape the agenda of the Parliament. The Icelandic government has involved political parties, academia and civil society organisations in a multi-annual collaborative drafting with citizens of a new Icelandic Constitution, with a crowdsourcing forum ‘Better Iceland’ ensuring online deliberation and facilitating constructive suggestions on amendments, arguments, and votes for or against proposals. The reached engagement of these initiatives dispel doubts that citizens do not want to, or can not, take meaningful part in policy debates. Elections are not sufficient – politics also happen in between and citizens need effective methods to communicate their input in real-time. The Conference on the Future of Europe is not only a key opportunity for this, its success relies on it. On the basis of this, ECAS has laid out five steps we believe are essential for a successful process and a conference fit for purpose in a Covid-19 world, which can be viewed here.

Putting what we preach into practice, ECAS has developed a crowdsourcing platform for meaningful citizen participation. As mentioned above, digital democracy is increasingly experimented with at local and national levels, but there are still no effective mechanisms for engaging citizens and CSOs in the process of co-producing policy solutions for Europe. Together with a consortium of partners, ECAS will next year launch the Co-Deciding Europe (CODE) project to pilot the collaborative method of crowdsourcing legislation in five beneficiary countries on the subject of ‘air quality’ – a topic chosen because of its transnational nature and the problems associated with it (estimated 400.000 premature deaths in Europe each year). Along with the aim to improve air quality, the project will establish a methodological framework how to assess crowdsourcing exercises and ethical standards for ‘social listening’.

If you are interested in further discussing this topic, join us this Tuesday (December 1st) for #TuesdayConversations, organised by New Europeans, and share your ideas and ‘Eureka’ moment about Europe. More details can be viewed here.

“Conversations between Europeans that are informative, inspiring & maybe even entertaining…”