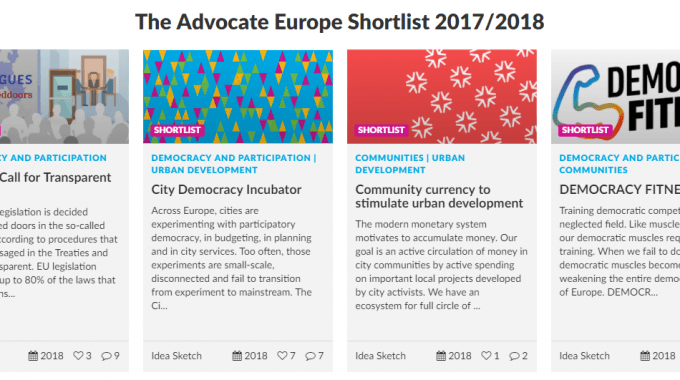 We are delighted to announce that out of 472 proposals our project “Citizens’ Call for Transparent Trilogues: Let’s build a more Democratic EU!” submitted by ECAS and VoteWatch Europe has been shortlisted for the Advocate Europe Challenge Camp!

ECAS and 30 other shortlisted candidates have been invited to present our ideas at the Advocate Europe Challenge Camp in Kiev, Ukraine from 25 to 29 April 2018.

Advocate Europe is an idea challenge initiative that calls on civil society actors to propose unconventional and transnational ideas that respond to Europe’s current challenges.

Our project aims to promote openness and transparency in the EU by making informal trilogue negotiations among the European institutions more accessible to citizens. In a recent study commissioned by the EESC, it was identified that 75% of EU legislation is decided behind closed doors according to procedures that are not envisaged in the Treaties and are not transparent. We also intend to call on the “wisdom of the crowd” for ideas on how to open up the informal negotiations between the trilogues to public scrutiny.

For more information see our idea poster and project proposal. Feel free to leave a comment: we want to hear from you!