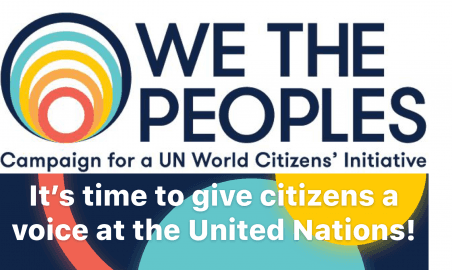 Over 200 NGOs from across the globe request the UN to establish a World Citizens’ Initiative and give people a direct voice in its affairs.

By Daniela Vancic, European Programme Manager at Democracy International
This article was originally published on the European Citizens’ Initiative Forum

If you were to ask someone on the street what they think their individual influence in the global arena of the United Nations is, you are likely to hear that they believe they have no influence. And they are not entirely wrong. The UN is a complex, international body that reigns way above the influence of the average citizen. Single active citizens making headlines like climate activist Greta Thunberg have made appearances before UN conferences, and the institution has since long made more of an effort to give civil society a voice. But the average citizen without a large platform or without NGO representation has little to no opportunity to propose ideas to the UN, let alone shape its agenda. This might sound like déjà vu to Europeans. In fact, the idea for a World Citizens’ Initiative is not incredibly novel. It is inspired from a transnational tool that has already existed since 2012: the European Citizens’ Initiative.