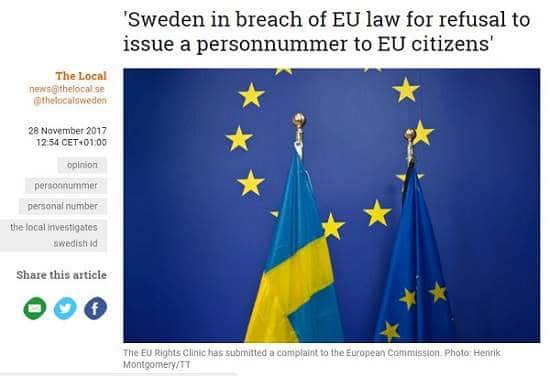 On 14 November, The EU Rights Clinic submitted a complaint to the European Commission against Sweden for the refusal of the Swedish tax authorities to issue a personal identification number – ‘personnummer’ – to EU citizens and their family members living in Sweden, preventing them from engaging in everyday life in Sweden.

The complaint has featured in articles published on Europe Street News and The Local Sweden (see the list below),

The complaint addresses the issue related to the Swedish population register law, which requires EU citizens to demonstrate that they will reside in Sweden for a year or more before being able to obtain a personal identification number – ‘personnummer’.

In addition, the complaint brings to the attention of the Commission Sweden’s unduly restrictive administrative policy on comprehensive sickness insurance, which does not accept either private healthcare or reliance on the public healthcare system.

In conjunction with the complaint, the EU Rights Clinic has also submitted a petition to the European Parliament.