Home>News>Our Summary of the ECI Day 2016 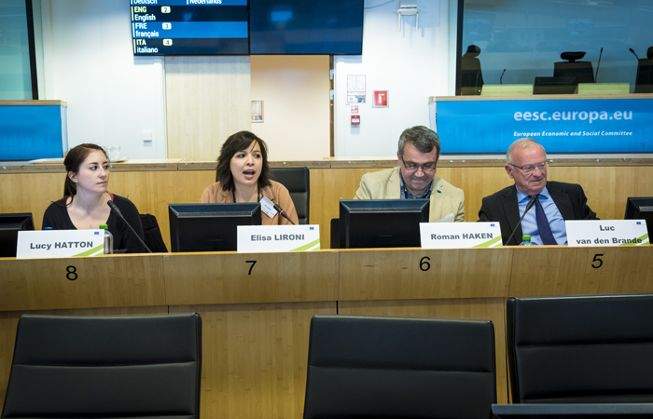 The ECI Day 2016: Forging Change took place at the Economic and Social Committee (EESC) on 20 April 2016 in Brussels. Organised by the EESC in cooperation with several civil society organisations, including ECAS, it represents an important annual meeting to exchange ideas on the ECI as a tool for participatory democracy in the EU. This year’s theme “Forging change” was focused on analysing the current situation of the ECI and the possibilities of enhancing its performance in the future.

On the eve of the ECI Day the ECI Support Centre, coordinated by ECAS, organised its traditional ECI cocktail that brought together different stakeholders and decision-makers. The cocktail was meant to be a networking event to build an alliance which will push for a genuine reform of the ECI Regulation.

The 2016 ECI day consisted of three parts, starting with a plenary session where the speakers discussed the functioning of the ECI and the required changes of the legal framework. The Ombudsman, Emily O’Reilly, touched upon the issue of “ECIs’ existential crisis”, pointing out the need to approach this tool politically. She also reminded 11 suggestions to improve the ECI proposed by the European Ombudsman. György Schöpflin MEP, author of the ECI report calling for changes in the Regulation, emphasised the lack of political willingness of the Commission to take action in revising the ECI’s regulation in order to improve it. According to Mr Schöpflin there is also a need for a greater involvement of Member States and the media.

Elizabeth Golberg, Director of Smart Regulation in the Secretariat-General of the European Commission, and Eric Stokkink, from the Ministry for Interior and Kingdom relations from the Netherlands, both acknowledged the flaws in the current ECI system, emphasising however that the ECI is still a young tool and has to be given time to show its full potential.

The second part of the day consisted on three workshops, one of which was chaired by the Digital Democracy Coordinator of ECAS, Elisa Lironi. The workshop was entitled “Lessons from the ECI: what future for participatory democracy in the EU?” and was meant to be a space for collective thinking and interaction. Its structure relied on Immanuel Kant’s most influential work “Critique of pure reason” and his 3 questions: What can we know? What can we do? What can we hope? Four panellists took part in the discussion: Luc van den Brande, member of the Committee of the Regions, Roman Haken, member of the EESC, Lucy Hatton, researcher on the ECI at the University of Warwick and David Garrahy, from the European Youth Forum.

The speakers agreed on the need of a more holistic and multi-level approach towards participatory democracy, pointing out the requirement for greater inclusion and better education on European affairs. Most of the panellists and members of the audience saw a future of more digital democracy but without excluding other means of enhancing participation.

The last part of the ECI Day 2016 included a final session aimed at reflecting on three questions:

Our Director, Assya Kavrakova, was invited to intervene during this final session. The other speakers were Carsten Berg, director of the ECI Campaign, Mads Hvid, Fair Transport Europe Campaign Assistant and Antonio Longo, member of the EESC, rapporteur of the ECI opinion.

Ms Kavrakova described the role of ECAS in addressing different aspects of ‘ecosystem’ of democratic participation in Europe. Regarding the current status of the ECI, she compared it with a cactus in a desert, lacking infrastructure to determine whether it is a real opportunity (an “oasis”) or not. According to our Director, the ECI is basically for citizens who can organise themselves and try to put their subject of interest on the EU’s agenda.