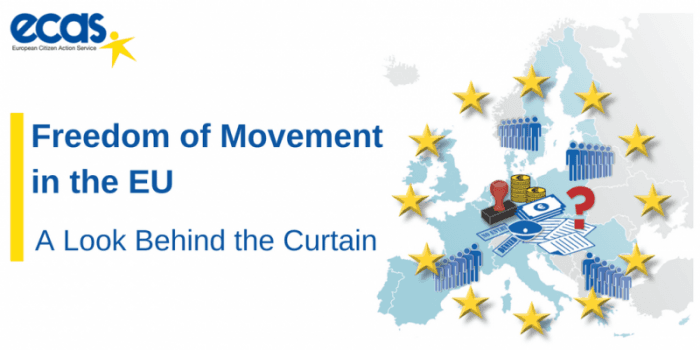 ECAS’ latest report entitled “Freedom of Movement in the EU: A Look Behind The Curtain” looks at the difficulties EU citizens and their family members face with regard to entry and residence rights in another EU country.

Freedom of movement and residence for EU nationals and non-EU family members has been a highly cherished accomplishment for many. While a cross border move goes smoothly for many, there is still a large number of EU citizens that report facing significant difficulties when trying to exercise their free movement rights.

ECAS has performed research to establish the main challenges EU mobile citizens and their families are facing with regard to their free movement rights, more specifically: their entry and residence rights.

The findings of the final report “Freedom of Movement in the EU – A Look Behind the Curtain” developed in the framework of the Act4FreeMovement project come from enquiries submitted between January 2015 and June 2017 to Your Europe Advice (YEA). YEA is an EU advice service which ECAS manages under contract with and on behalf of the European Commission. During this period YEA’s 61 legal experts responded to 13,236 enquiries concerning the entry rights of EU nationals and their family members and to 13,127 enquiries concerning  EU mobile citizens’ right to reside in another EU country.

As regards entry rights, it is not a coincidence that 90% of all entry enquiries concerned problems faced by non EU family members of an EU national when travelling with them or joining the EU migrant in their host country.

Citizens struggle to obtain clear and correct information about entry rules for their non-EU family members, whether online or directly from consulates or their private visa service providers. In many cases a visa is required when family members are visa exempt. Those family members who do require a visa are sometimes not even able to submit an application. This happens, for example, when they try to apply in the country where they are legally present or even resident but are told to apply to or in their country of origin instead.

When applications are accepted, family members’ right to have the application processed for free and quickly, as provided for by Article 5(2) of Directive 2004/38, is very often ignored. They have to comply with all formalities and provide the same documents as required from non-EU applicants that are not related to EU citizens. They may experience great delays in obtaining a visa or even have their application rejected on invalid grounds. Their original travel documents are sometimes withheld during the process, leaving them unable to travel.

In some cases, family members have been required to apply for long-term visas, with the added administrative formalities that this involves, when a short term one should suffice. When visas are issued, they are sometimes limited in duration to less than three months, for no valid reason, despite the family member’s unconditional right to remain in the EU with the EU national for up to three months. Moreover, family members have not always been treated courteously by consular staff or border control agents – they have been delayed and detained at the border and in some cases they have been denied entry on invalid grounds. The problems are exacerbated when airline staff do not apply EU entry rules and deny boarding to family members who have every right to travel.

In addition to the many difficulties associated with the application process itself, a very common complaint is that of delays in the issuance of residence documents after the application has been submitted. Between January 2015 and June 2017, 215 enquiries were received featuring complaints about residence documents not being issued to citizens within the six month time limit set by EU law. Over half of these complaints came from mobile citizens living in Ireland, Sweden and the UK. 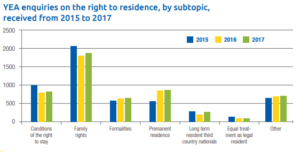 The inability to obtain a residence document promptly (or to be registered in the national population registry and obtain an identification number) results in some cases in significant practical difficulties to leading a normal life in the host country as access to public and private services may be difficult or even impossible without one.

Sweden is a prime example. “Complaints about the refusal to issue a personal identification number (personnummer) were made by over 200 citizens”. Without a personnummer it is not possible to rent accommodation, open a bank account, obtain a credit card, take out a mobile phone subscription, demonstrate medical coverage when seeking treatment at a clinic or hospital, register your children in school or complete many other essential formalities in Sweden.

Another example is France, where “prefectures often refuse to issue residence documents to EU nationals, even to those who have lived in France for more than five years”. The reason given by the authorities is that EU nationals are not required to have one, even if according to French law, they can ask for it. UK nationals living in France have been particularly affected, by being told to await the outcome of the Brexit negotiations before applying for residence documents. However, without residence documents many EU citizens are unable to receive family, disability or other benefits in France.

The report also identifies 15 grey areas where EU legislation needs to be clarified so that EU citizens’ free movement rights are not compromised. It advocates for the adoption of a new Communication by the European Commission on the Citizenship Directive so that guidance and clarification on these issues is provided.

ECAS’ Executive Director Assya Kavrakova, who is a member of the REFIT Platform Stakeholder Group, made a submission to the REFIT Platform outlining 10 loopholes which compromise citizens’ residence rights. This resulted in the adoption of a REFIT opinion recommending a new Communication on the Citizenship Directive, to which the Commission is expected to respond in due course

One of the main issues concerns the requirement for EU migrants to have a comprehensive sickness insurance in their host Member State in order to be entitled to reside there. In certain Member States with a residence based national healthcare scheme (NHS) it is not possible to pay contributions to the NHS (such as, for example, Sweden and the UK). This means that economically inactive citizens may find themselves in a situation where they are unable to obtain healthcare coverage and thus also unable to obtain a residence document or a national identification number.

This report urges the Commission to encourage Member States with a NHS to allow economically inactive EU migrants to rely on their NHS to satisfy the condition of having comprehensive sickness coverage – which is a prerequisite for their right to residence. If this is not possible, Member States should at least implement a system, whereby those EU nationals can pay into their host country’s NHS in a proportionate manner.

For more figures, information about individual countries, other citizen enquiries and further recommendations do not hesitate to contact us or read the full report here (short version here).