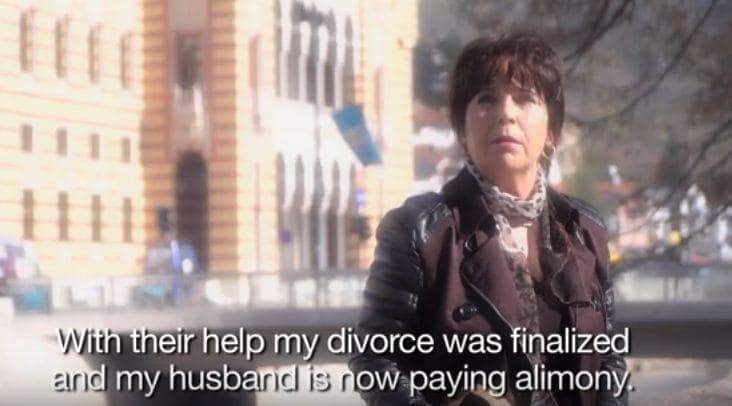 Triple A for Citizens is a 4-year project in the Western Balkans and Turkey, which empowers citizens to exercise their rights through the provision of free legal aid, advice and information. The project is led by ECAS and implemented in partnership with 10 other civil society organisations in the region, as well as in Ireland, the UK and Romania.

The video below presents the project and shows how it has helped citizens who have been denied access to legal advice and help, by sharing some of their testimonials.

One such person, Hata Spahic, was helped through her divorce following an abusive marriage. She said, “I went to them, they received me, listened to my story and they joined me in my fight for my rights. They helped me build my confidence and they helped me get a job.”

Another, Jasmin Durak, got fired from his job when he was on sick leave after he had an accident. After receiving legal assistance, he said, “My case in the court is finalising. It is going to turn out positively for me.”

Future of the project

ECAS’ Director, Assya Kavrakova, talking about the state of free legal aid laws in the region, where laws are in place in all of the countries except Serbia, talked about ways of using citizens’ views to improve the system as well as the need to build partnerships between organisations offering Triple A services.

“The fact that there is a law does not necessarily mean that it is effectively implemented. We plan to solicit the ideas of citizens themselves about what doesn’t work in the system and what could be improved, to take it on board to advocate for those improvements as well as, of course, to build more and more synergies between all the providers of information, advice and free legal aid.”

On 29 and 30 November ECAS organised the concluding conference of this project in Brussels “Access to justice beyond the EU: what role for civil society organisations”, where the main project outcomes and achievements were presented. Building on the success of Triple A, a pan-European network of free legal aid and advice providers was launched, which is open to all organisations that provide free advice services to citizens. More information on how to join this network at: https://old.ecas.org/ecas-launch-triple-a-european-network/

The full-length video can be found here.