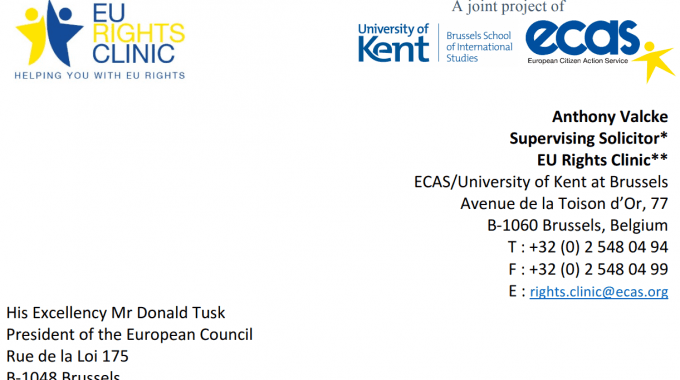 Following correspondence with the Commission’s Article 50 Task Force in December 2017, the EU Rights Clinic has received written confirmation that the acquired rights of certain family members and primary carers of children, who currently enjoy rights of residence, work and equal treatment under EU law, were not included in the interim deal on citizens’ rights that was reached on 8 December 2017 and which led to the conclusion of the first phase of Brexit negotiations.

Based on statements made in the Council’s negotiating guidelines and directives, the Commission’s Essential Principles on Citizens’ Rights, as well as the European Parliament’s resolution on the state of play of negotiations with the United Kingdom, the EU Rights Clinic considers that the interim deal fails to cover the entire spectrum of rights that all EU citizens and their family members presently enjoy under EU law.

In particular, the interim deal does not cover family members of EU citizens who have returned home after having resided in another EU country, as regards both those who have returned home before Brexit and those who will return to their home Member State after Brexit. The deal also fails to address the rights of so-called Zambrano carers – that is, non-EU parents of EU children living in their own country – and is silent on the continuing rights of free movement of UK nationals after Brexit. A number of technical aspects are also insufficiently addressed in the agreement.

The EU Rights Clinic is seeking assurances from the Council that the directives it will give to the Commission on the conduct of the second phase of negotiations will seek to enhance and extend the principles and commitments contained in the interim deal.

Priority in the second phase should, therefore, be given to the continuation of negotiations on citizens’ rights as a distinct strand that will cover the acquired rights of certain family members and primary carers of children, the continuing right of free movement of UK nationals in the EU27 after Brexit, the incorporation into the final withdrawal agreement of commitments made by the UK on “comprehensive sickness insurance” and “genuine and effective work”, and the inclusion of specific guarantees to ensure that restrictions on grounds of public policy or security comply with the principles of proportionality and equality, adhere to fundamental and human rights and provide for procedural safeguards and full rights of appeal.

If you would like to add your support for the letter, please fill in this short form!