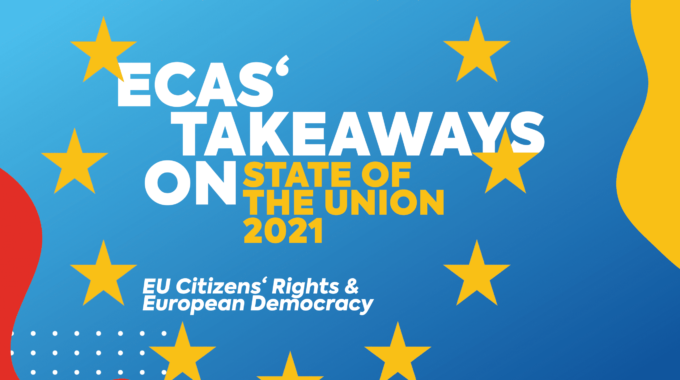 Today, the President of the European Commission, Ursula Von der Leyen shared her view on the State of the Union in 2021. ECAS followed the speech closely through the lenses of EU Rights and European Democracy.

Freedom of movement for workers has been one of the founding principles of the EU since its beginnings. There are almost 450 million European citizens. 26 million of them are between 25 and 29 years old, thus just at the beginning of their work career. Yet, they often face high unemployment rates, low wages and other challenges, which have been further exacerbated as a result of the COVID-19 pandemic. With this in mind, ECAS welcomes the announcement of the new mobility programme ALMA, which would “help […] young Europeans to find temporary work experience in another Member State”.

Those young people would join the other 13.3 million mobile EU citizens who live in an EU country other than their own: workers, students, self-employed, pensioners, etc. Yet, the conditions of their freedom of movement are often far from perfect, as they and their non-EU family members continue facing legal and administrative challenges when entering other Member States, applying for residence documents, accessing healthcare or job markets, trying to be politically active, etc.

While appreciating the new mobility opportunities for young Europeans that the ALMA programme would bring, ECAS calls on the European Commission to make sure that all mobile EU citizens face legal certainty and equal treatment when exercising their free movement rights. ECAS is therefore looking forward to the review of the 2009 guidelines on free movement, as announced in the EU Citizenship Report 2020, and calls on the EC to provide clarity on certain “grey areas” in Directive 2004/38/EC, which contribute to significant obstacles that mobile EU citizens face on a daily basis, as elaborated in our Policy Paper.

The COVID-19 pandemic brought limitations to freedom of movement on a scale never seen before. It affected particularly mobile EU citizens, by magnifying the obstacles that mobile EU citizens have been facing in their host countries in recent years and giving birth to certain novel concerns.

ECAS welcomes the efforts undertaken by the European Commission to restore freedom of movement, in particular through the EU Digital COVID certificate. At the same time, there are concerns in some Member States that mobile EU citizens face difficulties obtaining their certificates or having them recognized. ECAS calls on the European Commission to look into those problems and take a proactive action in order to make sure that all EU citizens can equally benefit from the instrument.

Ms von der Leyen highlighted that “societies that build on democracy and common values stand on stable ground. They have trust in people. This is how new ideas are formed”. Although ECAS agrees with this statement, we believe that the future of forming ideas and making public policies democratically must be discussed more prominently.

In an ever transforming world, democratic societies can only be sustainable if they embrace technology and the digital revolution (examples shown by Grazian & Nahr, 2020). Since our democracies are constantly challenged by forces both within and beyond the EU (e.g. governments that openly reject the fundamental values of liberal democracy, societal groups that stand outside the constitutional consensus and a global competition for political systems), we need a stronger commitment to preserving democratic values as well as embracing the evolving digital sphere.

Our ambition of a strengthened democracy can fully be reached only if we commit to improving decision making processes by allowing citizens to be truly involved. We need to strive for more participatory mechanisms (e.g. e-participation, crowdsourcing legislation – book chapter Lironi, 2021), more transparency in policy-making, and better policy outputs that have citizens’ interest at heart.

In this context, ECAS regrets the limited reference by the President of the European Commission on the Conference on the Future of Europe. The Conference is an unprecedented democratic exercise (and challenge) that will shape our Union and our continent. The (digital) tools applied for the Conference can lead to more democratic participation and point in the right direction. We need to ensure an ongoing use of these e-participation tools on the European level – to make political processes more open, transparent and inclusive. ECAS welcomes Ms Von der Leyen words affirming that “the Commission will be ready to follow up on what is agreed by the Conference”.

The President also stated that we must “shape digital transformation according to our own rules and values”. ECAS supports this goal and highlights that a European Union worth living in must care about its citizens and democracy as much as markets and profits.

ECAS regrets that the President only covered these matters briefly. We believe that a democratic digital transformation must be based on a comprehensive policy framework that leaves no one behind. For this reason, ECAS has recently opened a crowdsourcing on “Digital Transformation”  in the scope of the Civil Society Convention on the Future of Europe in order to collect organisations ideas on how the EU should develop further its digital priorities. We call on CSOs across Europe to join us in this effort in order to work together towards creating a digital EU – truly fit for all.