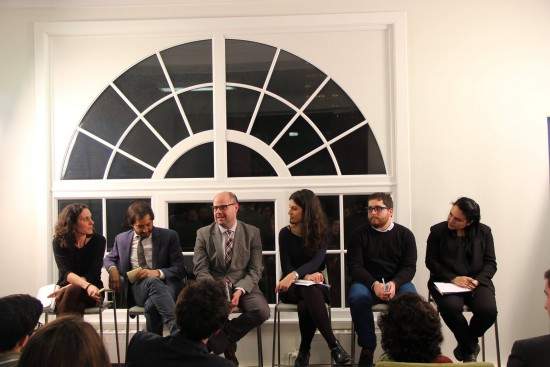 On 24 February 2016, ECAS’ Membership and Outreach Manager, Marta Pont, participated in a round table on the topic of agenda-setting at EU level and on the existence of a European public opinion. The round table took place in Brussels and gathered EU correspondents and representatives of interest groups and civil society.

There was general agreement among the panellists that there is not yet such a thing as a European public opinion as it exists on a national level. This was found on various grounds: first, European politics are still largely driven and analysed from national lenses; second, there are no genuine, large-scope European media outlets – the existing ones are read in Europe’s capital, but do not reach national audiences.

At the same time, several panellists stressed that while we cannot yet talk about a European public opinion, there have been significant citizens’ initiatives and mobilizations, in particular in the past few years, through which citizens across Europe have come together on issues of shared concern. For example, panellists cited the reactions against austerity measures in several Member States, the negotiations with the US on a trade and investment deal (TTIP) or the response towards the migration and refugee crisis in Europe. On that point, ECAS’ Outreach Manager mentioned the European Citizens’ Initiative (ECI) as an important tool set up by the European Commission in 2011 to allow EU citizens bring matters of interest and/or concern to the European agenda. Marta explained that ECAS coordinates the ECI Support Centre – a non-profit service which provides legal advice and support to ECI organisers before and during the process of launching and implementing an ECI. However, she continued to explain that this potentially powerful instrument has led to general disappointment among EU citizens given the high complexity of the system in place, as well as the practical response given by the Commission to the initiatives successfully registered so far.

Another important messages that came out of the discussion was the fact that negative messages about the EU largely overrule the positive ones, which further triggers Euroscepticism, a lack of identification and sense of belonging to the EU among the young generations in particular, and the need to create a new narrative for Europe that can help citizens re-engage with the project,

The event was organised by Horitzo Europa (a Catalan pro-European non-profit association set up in 2008 whose mission is to foster the debate about European and international matters, as well as the debate about Catalonia’s contribution to the European integration process), in partnership with the Catalan Association of Political Scientists and Sociologists (COLPIS).