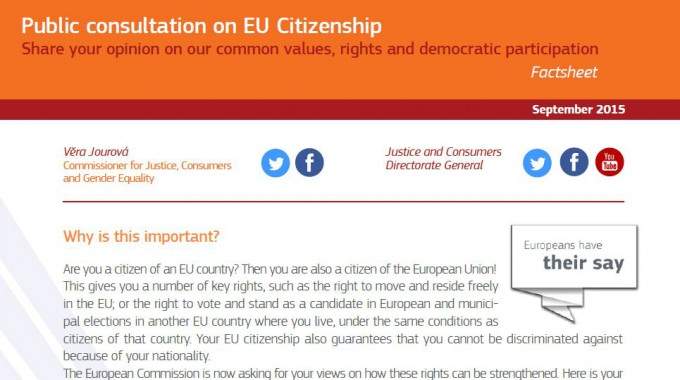 The European Citizen Action Service (ECAS) has the pleasure of submitting this Summary of 10 Recommendations in addition to its online response to the EU Citizenship Consultation.

Our Mission and Projects

ECAS is an international non-profit organisation, based in Brussels with a pan-European membership and 24 years of experience in working on EU issues. ECAS’s mission is to empower citizens to exercise their rights and promote open and inclusive decision-making through the provision of high quality advice, research and advocacy, as well as capacity building to civil society organisations.

ECAS has an extensive track record in helping EU citizens to exercise their rights of free movement and in-depth knowledge of the practical problems associated with their implementation. For the last 18 years, ECAS has been running “Your Europe Advice”, an EU advice service provided by ECAS’s team of 59 legal experts in all 24 official EU languages and in all 28 EU Member States. The service provides advice to citizens on their rights under EU law covering social security, residence and visas, work issues, and taxes among other issues. In 2014, ECAS legal experts responded to over 20,000 enquiries from citizens.

In addition, in partnership with the University of Kent in Brussels, ECAS established the EU Rights Clinic, which aims to help EU citizens and their family members who are faced with complex problems when moving around the EU. The Clinic handles around 70 cases annually. Considering the deteriorating framework of free movement rights’ enforcement recently, in addition to the populist rhetoric on the issue in certain Member States, in 2014 the EU Rights Clinic and ECAS launched the “Right to Move” Campaign based on 7 Strategies to support free movement in the EU.

ECAS is implementing a Digital Democracy Agenda with the aim to explore the democratic potential of ICT in reducing the gap between the political elites and citizens and transforming the relationship between EU citizens and EU decision-makers into more of a partnership, thus contributing to the creation of an engaged citizenship.

ECAS actively supports the implementation of the first transnational instrument of participatory democracy in the EU – the European Citizens’ Initiative (ECI) – through the ECI Support Centre, by providing legal advice, research, analysis and recommendations for the simplification of the ECI Regulation.

Our 10 Recommendations for Improving EU Citizenship

The 10 recommendations below draw on ECAS’ experience. We hope they will be useful and we remain at your disposal should you require any further information.

Recommendation 1: encourage Member States to adopt a more proactive approach in raising awareness about a first-hand information on EU law available at EU level and in provision of training at various levels of the national administration on EU citizen rights.

Recommendation 2: unify at EU level or harmonise as much as possible across Member States the procedures and the documents for obtaining residence. Encourage Member State to clarify and make procedures more accessible to citizens.

Recommendation 4: strengthen the European dimension of EU elections through European transnational lists, allowing parties to campaign and fight for European mandates, as opposed to the current system, where EU elections are approached from a national perspective.

Recommendation 5: improve and develop further the practice of the “Spitzenkandidaten” by giving citizens -instead of political parties- the opportunity to identify the lead candidates running for the Commission Presidency and to pre-select them.

Recommendation 6: introduce e-voting as a way to facilitate the exercise of the right to vote in EU elections, while ensuring that the system for registering and collecting the votes is fully reliable, so that no double voting occurs, and that personal data is duly protected and kept confidential.

Recommendation 7: encourage cross-border broadcasting as means of provision of objective and impartial information to EU citizens on the actual situation with regard to EU policies, legislation and actions, thus diminishing the possibility for populistic interpretation of facts.

Recommendation 8: adopt a tailor-made approach to engaging youth by identifying where young people naturally are in the digital space and going to them through e-participation and creation of appealing digital content on EU policy-making.

Recommendation 9: improve and further develop existing instruments – e.g. the European Citizens’ Initiative by clarifying the legal admissibility test and by simplifying the online process of collecting signatures in order to make it much more accessible to EU citizens.

Recommendation 10: initiate a crowdsourcing experience at the EU level to enable citizens to express their ideas, interact with policy-makers more openly on a regular basis and to even co-decide with them in certain cases.