Home>News>Democratic Progress in the 21st Century

Democratic Progress in the 21st Century 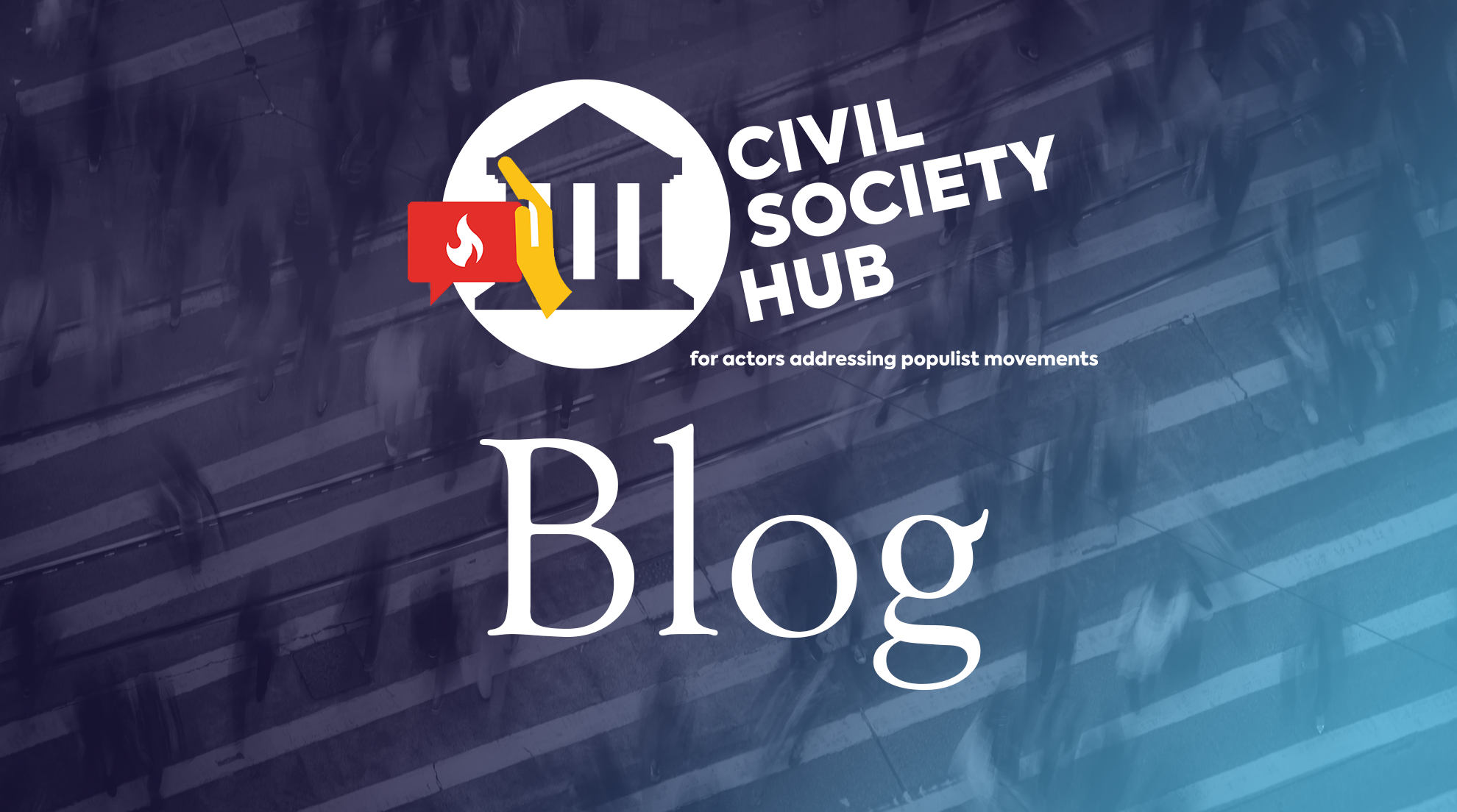 The “Democratic Progress” Task force of the “Civil Society Hub for actors addressing populist movements” worked between January and March 2022. The members had exchanges on the different experiences made in their repsective projects, related to democratic progress. This blog post is the first of a series of three (“DiverseParticipation” and “Inclusive Societies” coming up later this year). The members of this taskforce and hence authors of this blog post are Sebastian Schweitzer, European Intercultural Forum e.V.; Vasili Sofiadellis, Changemakers Lab; Viviana Mirenzi, DYPALL Network; Tom Vogt, University of Augsburg; Hendrik Nahr, ECAS.

The fact that democratic societies are facing a great number of challenges goes without saying these days. Ultimately, the invasion of Ukraine makes it clear that the opponents of democracies cannot only be found internally, but also externally. This does not diminish the threats from inside democratic societies. Some relevant ones are:

Of course, there are no catch-all solutions to those problems identified. No silver bullet will bring immediate change and will turn all to the better. Still, different processes can be triggered to strengthen democratic structures. This is what the task force was exploring together. The authors were building on the experiences in their working environment. Generally, new modes and innovative tools of democracy can help liberal democracies to overcome the above identified problems.

There appears to be distrust between citizens and governing officials at all levels, from local municipalities to regional and even national governments. The rapid transformation brought about by digital technologies, from the way we work to where we work, is instilling anxiety and uncertainty in the minds of our population. The fact is that the “business models” and way of doing business has shifted for all, whether you are in government, corporate, and even academia.

Despite their best efforts to innovate and embrace this transformation, the operational systems and processes in place are inefficient and ineffective in doing so, resulting in the digital divide. This divide just increases fear and uncertainty, leading to governments relying on populist views to garner votes, further polarizing rather than uniting nations.

New democratic forms and institutions, in general, can help liberal democracies overcome the challenges highlighted. We will need to build more collaborations, partnerships, and dialogues with a range of stakeholders (SDG17 SDG16 SDG8) so that we may consider more viewpoints on a number of levels and embrace this transition collectively.

This is where the potential of digital ecosystems (communities), which are primarily represented by coworking spaces, creative hubs, and youth centres, are critical platforms for enabling this shift becomes important. The creation of an enabling environment in which diverse stakeholders (government, corporate, academia, and civil society) can collaborate to accelerate social tech entrepreneurs and digital technologies while holding open and inclusive dialogues about social challenges, cultural, and democratic experiences would be a key focus for this.

The Conference on the Future of Europe has taken a significant step in this direction; now we must bring together and elevate the voices of our citizens and digital ecosystem players to ensure that we create an inclusive and enabling environment that embraces citizens’ needs in the digital transformation and closes the digital divide. The goal of these platforms is to facilitate true contact between citizens and decision-makers, which will aid in the resolution of social issues and the restoration of confidence in our society.

Digital tools as a bridge between citizens and administration

The digital revolution came with many new opportunities for societal life generally. One of them being a better link between (engaged) citizens and decision makers. In fact, many of such applications or programmes are already in place to strengthen the engagement. Often, the focus here lies on the local level through the creation of specific apps that give the opportunity to the citizens to add their opinions and needs on the local community and to shape municipalities in a more citizens friendly way. One example of this is “MyPolis”, a Portuguese initiative that includes several municipalities and in which all the citizens have the opportunity to contribute sharing their ideas about social environment, green areas, and specific issues to be addressed by the local authorities for creating a better shared community.

Here, user friendliness and gamification elements are key to make it as easy and as much fun as possible for people to engage. There are some specific platforms, such as Discord, Minecraft, and specific tools created for the municipalities’ needs in order to engage the citizens in a more inclusive way. Another example is “Build it”, a platform created by Tree Company that gives the opportunity to the local community to address its needs and perspectives, raising the awareness about democratic participation. Generally, digital tools provide the opportunity for people (even strangers) to jointly solve societal challenges. Here, a multi-level approach could be valuable: starting from the local level and lifting it to a higher level (regional, national or even European). See also CODE Europe (a project that aims to crowdsource citizens’ views on air quality) in this context.

Guided and empowered by a Participatory ACTION Research framework, a win-win learning partnerships between universities and local community institutions such as community centers, youth clubs, churches, and schools is created. Within this dynamic field of youth development, film and music video production, as well as related digital tools such as Final Cut Pro, Garage Band, Gathertown, Scratch, etc., motivate social, emotional, and technological skills for university students, local youth, and families. The healing power of music, in particular, has become apparent for all to see during the pandemic and continues to embody exactly the kind of robust intersubjectivity, human communication and intercultural understanding that we need to reconnect with each other in these challenging times.

Institutionally speaking, universities, in particular, must accept such leadership roles in the fight against systematic racism, colonialism, and facism, not only intellectually, but also socio-politically, by honoring social diversity in deed, as the social reality that it is. This includes making sure that young people from diverse backgrounds have access to quality learning environments and to the universities themselves (see e.g. here).

Citizen assemblies are another format that has been rising in popularity across Europe to ensure that perspectives of citizens have a platform to influence political agendas and decision-making. While there are many examples to be found on local and national levels, an example on European level is the European Citizens’ Assembly (ECA) which has the aim to “deliver high-quality decisions made by an independent and representative group of citizens on any topic concerning the European Union”.

Direct nonviolent actions might not qualify as new modes of political participation because they have been around for centuries. But they definitely represent direct forms of participation open for anybody to use, and are often not sufficiently utilized. They are a fundamental pillar of a vivid civil society to expose and counter populist narratives, agendas and actions as well as their diverse effects. The increase of nonviolent civic campaigns underpins this, but unfortunately the decreased ability to strategize, engage and mobilize has weakened their effectiveness lately.

As Erica Chenoweth writes in The Future of Nonviolent Resistance, “perhaps counterintuitively, the coronavirus pandemic may have helped to address some of these underlying problems by driving movements to turn their focus back to relationship-building, grassroots organizing, strategy, and developing narratives that resonate with a captive audience”. If this is done effectively, only then civic activism does translate into tangible community actions – beyond click activism – that can challenge populist narratives and actions. Nonviolent techniques of community organizing can be found for example at the Beautiful Trouble platform.

Transparency and accountability are one of the most important preconditions for democratic societies. Without knowing what policy makers do, citizens cannot understand whether or not they agree or disagree with their positions. In short: we cannot hold them accountable. Therefore, when discussing democratic progress, transparency and accountability are key.

For this, technology comes with great opportunities. Digital tools, such as Parliamentary Informatics can establish democratic progress by enhancing transparency (examples for this are VoteWatch, Vouliwatch, or Datan). Besides, transparency is not only important when it comes to decision makers only. It is also viable for other actors in the public space. Debunk platforms can, for example, play an important role in tackling fake news. Here, the case of Meltwater or EUvsDesinfo are worth highlighting.

At the same time, new tools and technical solutions are not sufficient. A general culture of transparency and openness is equally needed. Decision makers must be aware of their obligations and commitments when it comes to transparency.

Finally, it is relevant to mention that such processes can be initiated by authorities or governments themselves – as well as by civil society as an external watchdog (see Grazian & Nahr 2020).

In short, democratic progress is necessary to adopt our polity settings to the social, political and cultural developments. The ways to proceed with these adoptions and the exact shapes are manifold and can be challenging. Having said that, enabling more dialogue and cooperation, digital tools to bridge between citizens and decision makers, more engaged scholarships, new modes of participation and increased transparency can be promising ways to get there.