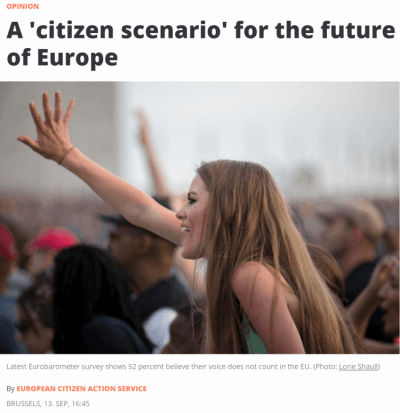 On 13 September, ECAS’ response to President Juncker’s State of the Union address featured in EU Observer, setting out the need for a ‘citizen scenario’ for the future of Europe.

In his address, President Juncker outlined his own “scenario six”, emphasising freedom, equality and the rule of law and speaking positively about strengthening European democracy, but EU citizens themselves were absent from his vision.

In the opinion, ECAS makes the case for a democratic renewal of the European project, taking advantage of digital technologies to redefine the relationship between the governors and the governed, making the EU a collaborative partnership between policy-makers and citizens, and strengthening the enforcement and implementation of the rights EU citizens are legally entitled to as part of their European citizenship.

Digital technologies and platforms present a unique opportunity to transform the relationship between governors and the governed into more of a partnership and to build mechanisms of participatory democracy. For Europe, this means that the EU can become a collaborative project in which everyone has a voice.

Digital democracy has great potential to enhance the existing participatory mechanisms by drawing on the “wisdom of the crowd”, tapping into hidden expertise and engaging those groups who participate least in democratic society – most notably young people.

Find out more about Digital Democracy