Home>News>ECAS Highlight of the Week – EuroPCom 2020: Building our future together

ECAS Highlight of the Week – EuroPCom 2020: Building our future together 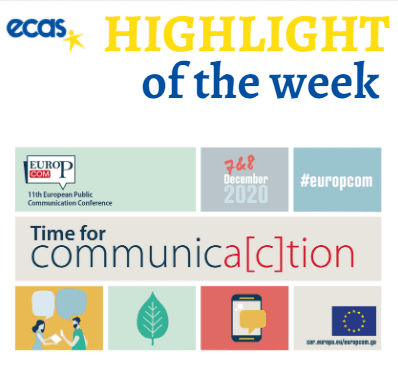 Citizen engagement is a two-way process between citizens and decision-makers, and as such, should be pursued through different tools that entail both a bottoms-up and top-down approaches. Governments are increasingly embracing participatory and deliberative initiatives directly involving citizens in the co-creation of policies, but there needs to also be communication and awareness raising, preferably embedded in society, to incentivise and empower citizen’s participation.

The European Public Communication Conference (EuroPCom), which took place online on December 7th-8th, explored the latter through a series of sessions and conversations with citizens, civil society organisations and representatives of the EU institutions. The event was rightly promoted as “turning communication into action”, with participants sharing ideas on how to ensure that citizens in the EU are not just listened to, but that they are actually being heard. Though the event has concluded, it put forward important messages for one of the biggest ‘communication exercise’ yet to take place – the Conference on the Future of Europe.

‘For a truly inclusive debate’

The aspiration of the Conference on the Future of Europe is to give European citizens a leading and active role in the debate on the future of Europe. This is not new – over the years the EU institutions have been intensifying their efforts to connect better with citizens. But as mentioned above, for the most part it has been in the form of listening exercises, with no concrete results to show for it. Could it be different this time, and how?

It was these questions that brought together a panel of experts for one of the EuroPCom sessions ‘For a truly inclusive debate’. ECAS Executive Director Assya Kavrakova took part in the conversation, presenting ECAS’s position on how to ensure inclusiveness in the Conference, so that ‘we are all building our European future together”.

“Only by creating synergies among different methods of democratic innovation, that a real European public space as a public sphere of dialogue, debate & co-production of decisions not only for, but WITH, the citizens of Europe will be created”.

Mrs Kavrakova stressed that the Conference should pilot different methods of citizen engagement, which can be taken on board beyond the process and be put in practice in more consistent ways. Based on ECAS’s work, expertise and assessment of existing successful initiatives around Europe, examples include:
Citizens assemblies:
These assemblies should be composed of randomly selected citizens, representative of different socio-economic status. Besides deliberating on issues of local, national or international importance, citizen assemblies can also provide qualitative evidence why a group thinks in a certain way. As people are quite polarized when it comes to certain issues, this is useful to understand what motivates them to think in certain ways, and whether in certain circumstances they can change their thinking.
Crowdsourcing to tap into the wisdom of the crowd:
Crowdsourcing, amongst else, can ensure the co-production of policies in real time. On an European level, this should be ‘organised’ on a miltilingual platform, allowing citizens to provide their input in their national language. 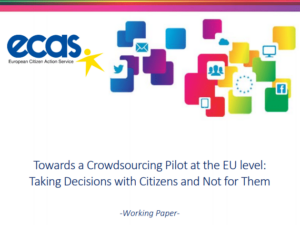 An assessment done by the European Citizen Action Service (ECAS) of 27 national case studies of co-deciding with citizens using information and communication technology (ICT) from around the world suggests that crowdsourcing tools, especially as a component of democratic innovation, can enhance participation by involving citizens and civil society beyond the typical stakeholders, including young people. It can also ensure a learning process for both citizens and decision-makers through a real-time exchange of views and opinions on the content and process of policies and policy-making. Fresh and innovative ideas for shaping policy based on the “wisdom of the crowd” can emerge, allowing “hidden” expertise into the debate. Finally, it increases the legitimacy of policy-making, which is an ever-increasing necessity in the EU.

ECAS experimented with this method through a collaborative project on youth mobility and eparticipation. More specifically, the aim of the Digital Ecosystem for E-Participation Linking Youth (DEEP-Linking Youth) project was to explore how e-participation can foster young people’s empowerment and active participation in democratic life. The project tested the functioning of a digital ecosystem for youth engagement by bridging technology and young citizens on a common task with the aim to provide quality input to decision-making in view of producing a sustainable impact.

Learn more about the project and the yielded results here.

The above examples and many other should inspire the European institutions to innovate and take full advantage of ICTs in order to ensure that the Conference will be “a new public forum for an open, inclusive, transparent and structured debate with citizens”, using a multilingual digital platform to maximise participation, accessibility and transparency. For broader involvement, online tools should be complimented with offline activities. Face-to-face consultations and public debates on a national level can complete the ‘vision’ of the type of European Union citizens want moving forward.

ECAS has further outlined five phases we believe are essential to ensuring the success of the Conference, which can be accessed here.
During EuroPCom, ECAS also held a virtual booth to connect with citizens and other civil society organisations. Within its framework, members of our team carried out three separate presentations, exploring different methods of citizen engagement, namely: 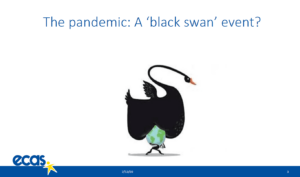 Digitize your EU activism: E-participation that makes a difference
ECAS Citizens’ Rights Training Coordinator, Petar Markovic, gave an overview of the e-participation tools that can actually make a tangible change in how citizens reach decision-making in the EU. Using the Covid-19 pandemic as an example, he highlighted how to turn the ‘black swan’ of events into opportunity to amplify EU citizens’ voices and impact.

The full presentation can be viewed here. 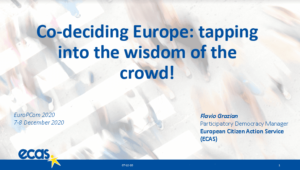 Co-deciding Europe: tapping into the wisdom of the crowd!
ECAS Participatory Democracy Manager Flavio Grazian spoke about methods of collecting citizens’ input from across the EU on issues that affect us all. Putting what we preach into practice, he presented an ECAS collaborative Co-Deciding Europe (CODE) project. Digital democracy is increasingly experimented with at local and national levels, but there are still no effective mechanisms for engaging citizens and CSOs in the process of co-producing policy solutions for Europe. Together with a consortium of partners, ECAS will next year launch the Co-Deciding Europe (CODE) project to pilot the collaborative method of crowdsourcing legislation in five beneficiary countries on the subject of ‘air quality’ – a topic chosen because of its transnational nature and the problems associated with it (estimated 400.000 premature deaths in Europe each year). Along with the aim to improve air quality, the project will establish a methodological framework how to assess crowdsourcing exercises and ethical standards for ‘social listening’. 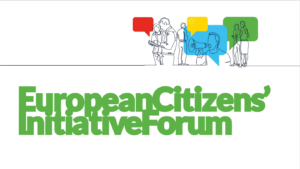 Where civic activism starts: European Citizens’ Initiative Forum
ECAS Citizen Deliberation Coordinator, Hendrik Nahr, and communications intern Rhys Nugent introduced the European Citizens’ Initiative (ECI) Forum and how it engages citizens and ECI organisers in a collaborative and multilingual space. The various support mechanisms of the Forum were highlighted and it was illustrated how they provide citizens with the knowledge, tips and support they require to launch an initiative, connecting them with other citizens from around Europe in the process.

Focusing on the communications aspect, participants received tips and advice on how to best campaign in times when the battle for online attention is fierce. The Forum held a webinar on the topic in June, with experts Olga Kikou of the End the Cage Age initiative, and Meike Hartwig, Senior Campaigner at Change.org, which can be accessed here.

EuroPCom 2020 – Time for Communica[c]tion is the premier conference and networking event for professional communicators working in the public sector in Europe.

Usually held as a physical event, this year’s main EuroPCom event was held completely online on 7-8 December 2020. Participants had the opportunity to communicate with citizens at different levels, coming from a wide range of European, national, regional and local public sector, private and non-governmental organisations. All took part in a packed programme of EuroPCom talks, workshops and Ideas Labs, with the aim to help them more effectively turn their communication into action.

The activities were build around three key themes: Citizens, Green and Digital. The conference also largelyfocused on the two new European initiatives that will have a major impact on citizen communication in the coming years, namely the Conference on the Future of Europe and the European Green Deal.

The programme was accompanied by the EuroPCom Market Place, where participants were free to network and engage with the different organisations that held a virtual booth throughout the event.