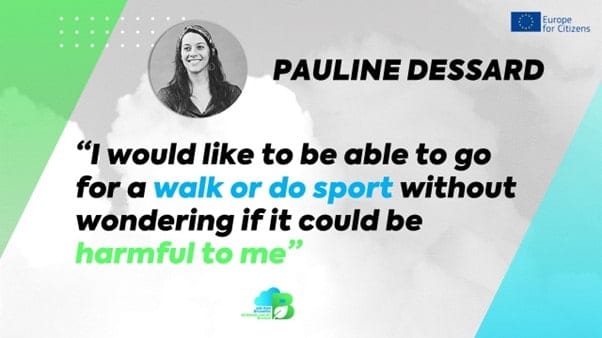 The Brussels for Clean Air participatory democracy campaign entered its second phase a month ago. The crowdsourcing platform already collected 47 solutions in Brussels. Since the beginning of the campaign, citizen ambassadors have mobilised to spread the word about the initiative. Pauline Dessard is a citizen ambassador for the campaign. In this context, we asked her about her engagement.

ECAS: How does Air pollution affect you in your daily life?

Pauline Dessard (PD): Living in a city, I am continuously exposed to this air pollution. I am exposed when I cycle to work and when I play sports in the open air. Working in the health-environment field, I fully understand the consequences of this pollution on health and the risks it entails…I would like to be able to go for a walk or do sport without wondering if it could be harmful to me.

ECAS: Why did you decide to engage as citizen ambassador in Brussels for Clean Air?

PD: I think it is very important to help relay the feelings of citizens on this issue to the relevant authorities. We often have the impression that the measures to be taken to improve air quality are not popular, but I think that citizens are concerned about their health and would like politicians to do the same. I am committed to trying to make this project reach as many people as possible so that everyone can express their views on this issue and get things moving.

ECAS: Why should your fellow citizens participate in Brussels for Clean Air?

PD: Because this issue affects everyone and is especially important for children. By participating in this project, you give it weight and the possibility to lead to concrete measures that can be heard by politicians and are effective. We need as many citizens as possible to speak out on this issue in order to show the public authorities your concerns and hope for a rapid change!

ECAS: What do you think could be done to make air cleaner in Brussels?

PD: There are many solutions:

ECAS: Do you encounter resistance when you speak out against air pollution?

PD: Not particularly. As I explained earlier, this is an issue that most people are concerned about. People are willing to understand and change to improve the air they breathe. I think that the competent authorities must now help them and catalyse this change by putting various measures in place, as I mentioned earlier. The ground is fertile…

ECAS: What do you expect from Brussels for Clean Air?

PD: To continue to act as a relay between the citizens and the competent authorities and to succeed in developing concrete advice based on the feedback of the citizens!

You can find the original version of this interview in French: here.