Our Director, Keynote Speaker at the ECI Public Hearing 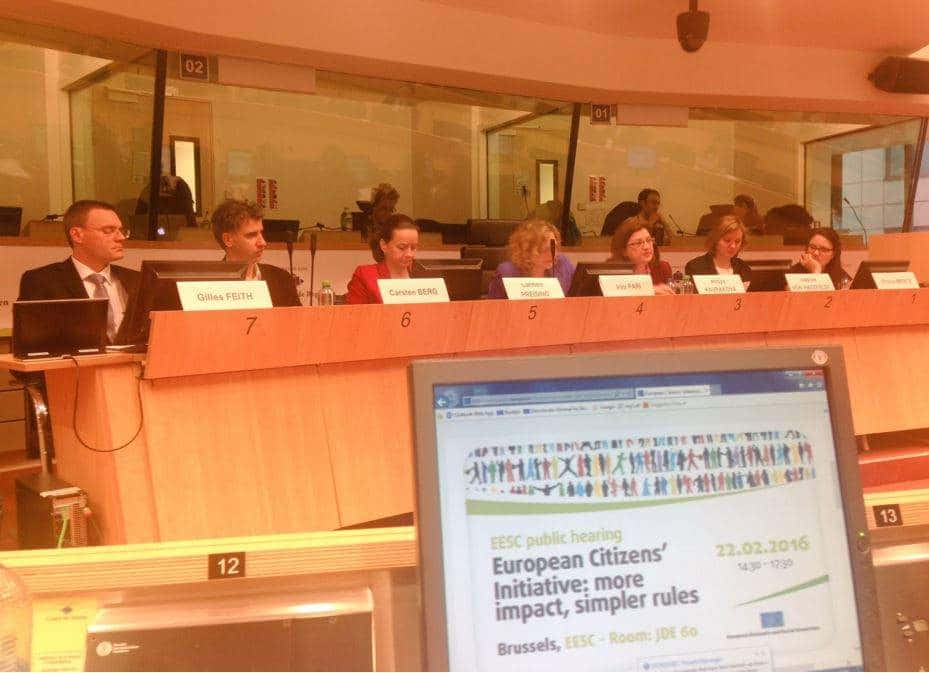 On 22 February 2016, ECAS’ Director, Assya Kavrakova, was the keynote speaker at an ECI hearing organised by the European Economic and Social Committee (EESC). The hearing marked a turning point in any remaining hope for an ECI reform in the coming year, as a Commission representative conveyed that the ECI Regulation will not be revised this year.

This did not come as a large surprise after EurActiv published an article with minutes from a December College meeting where the Commissioners “regretted that…citizens’ initiatives did not always move European law or the European project forward…and ultimately generated Euroscepticism”. Nonetheless, the ECI hearing gathered many speakers, each explaining the possible benefits of a reformed ECI Regulation. Assya Kavrakova stressed the significance of the ECI as the first transnational instrument of participatory democracy not only in Europe but in the world. As pointed out in the presentation from Carsten Berg from the ECI campaign, the ECI is currently in danger of becoming a “democratic window dressing” instead of a “usable tool of public participation” as it was set out to be. Without revision, he noted, the ECI will remain inoperative and unproductive – a mere semblance of participatory democracy. In the mission of empowering citizens, however, appearance will not be enough.

Our partner in the ECI Support Centre, Sophie von Hatzfeldt from Democracy International, concluded that citizens need more involvement in the process, calling for deeper reform of the ECI process rather than small changes. One of her suggestions was naming citizens co-legislators, providing them with a stronger follow-up after an ECI is completed. Another was giving more weight to an ECI by allowing European-level referenda when five-million signatures have been reached. Empowering citizens is key to the ECI, and without tangible results, motivation to initiate an ECI will only further abate.

For the present, however, the Commission is resistant to revise the ECI Regulation as Juncker’s team puts their focus on “bigger” issues. As ECAS Director pointed out, however, it is hard to measure the gravity of and public interest in the ECI project because the ECI is unique and cannot be compared to anything that the Commission has put forth in the past. Its menial statistical presence since 2011 (only 3 ECIs have been successful) does not necessarily label it as a “small” initiative, but is more likely indicative of the complicated registration process that makes ECIs incredibly challenging and frustrating to complete. As ECAS Director added, “collecting one million signatures across at least seven countries within twelve months is easier said than done”, and considering that about 40% do not even make it to the registration stage, a reform of the ECI Regulation is clearly necessary. What needs to be done in terms of reform has already been discussed and is well-known, the question is now when such a reform is going to take place, she contented. ECAS Director also made the point that new channels for engaging with citizens are needed at EU level beyond ECIs, which serve rather a specific purpose. She pointed in particular to complementary eDemocracy tools including crowdsourced legislation – an area in which ECAS is keen on advancing.

Overall, there is much to be done in terms of the ECI, but as all of the speakers pointed out, with some revision a user-friendly and accessible tool for participatory democracy is within reach. The ECI is a unique tool, and when it reaches its potential, not only will citizens feel individually empowered, but the European project as a whole will progress.