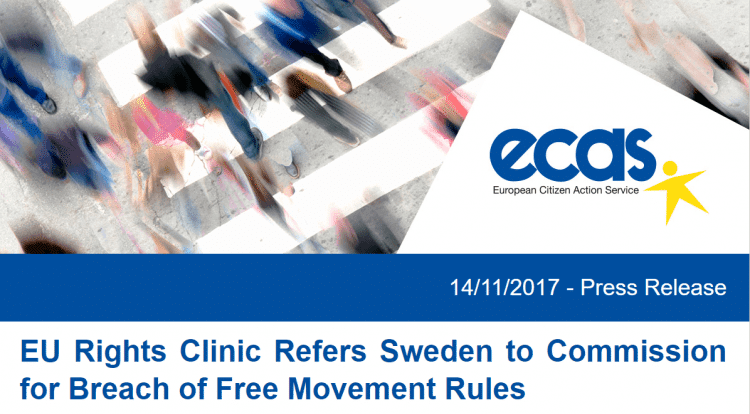 Today, the EU Rights Clinic has submitted a complaint to the European Commission against Sweden for the refusal of the Swedish tax authorities to issue a personal identification number – ‘personnummer’ – to EU citizens and their family members living in Sweden, preventing them from engaging in everyday life in Sweden.

A personnummer is essential for accessing any kind of private or public service – banking services, renting a home, phone and internet services, medical treatment, and getting a job. The systematic refusal to issue a personnummer to EU citizens and their family members constitutes a restriction on their free movement rights and is in breach of EU law.

As this is a problem that has existed for over ten years, we urge the Commission to take a strong enforcement stance and bring  infringement proceedings against Sweden under Article 258 TFEU and take the case to the European Court of Justice (ECJ) without further delay.

In conjunction with the complaint, the EU Rights Clinic will also be submitting a petition to the European Parliament.

The problem relates to the Swedish population register law, which requires EU citizens to demonstrate that they will reside in Sweden for a year or more before being able to obtain a personal identification number. In addition, the Swedish administrative policy on comprehensive sickness insurance is unduly restrictive because, in practice, neither private healthcare nor reliance on the public healthcare system is accepted.

Under EU law, EU citizens should be considered genuinely resident in Sweden after having lived in Sweden for only three months. While EU law does allow Sweden to require EU citizens who are not in employment to hold comprehensive sickness insurance for themselves and their family members, the rules must be applied in a proportionate way and must give due regard to all forms of healthcare coverage. The Swedish rules are in breach of Article 45 Charter of Fundamental Rights, Articles 20, 21 and 45 of the Treaty on the Functioning of the European Union, Articles 24 and 25 of Directive 2004/38, as well as related ECJ case law.

The Commission has previously investigated the problem and issued a Letter of Formal Notice in infringement Case 2007-4081, but the case was closed because of assurances given by Swedish authorities. The Parliament has also received a number of petitions and recommended the use of the so-called “coordination number”, but this is not a feasible solution because such a coordination number does not provide access to the full range of public and private services.

Read the executive summary of the complaint here
Petition to the European Parliament – submitted on 15 December 2017
For more information, please contact huw.longton@ecas.org