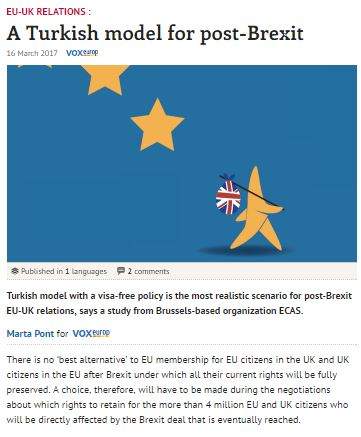 On 16 March, our colleague Marta Pont was featured as a guest editor on VoxEurop on the impact of Brexit on citizens’ rights. In her article, she summarises some of the findings of ECAS’ recent study “5 Takeaways on Brexit: Outlining Possible Scenarios for a New UK-EU Relationship and their Impact on Citizens”. She also points to the Turkish model based on an Association Agreement with the EU as a possible middle ground scenario during the negotiations, which would allow EU citizens to preserve some of their current rights once Brexit effectively takes place, while not obliging the UK to bear all the consequences of full membership of the single market.

As part of its mission to empower citizens to exercise their rights in the EU, ECAS, in partnership with the EU Rights Clinic, the European Disability Forum and the New Europeans, has considered the impact of Brexit on citizens’ rights under different scenarios compared to the rights that citizens currently enjoy whilst the UK is a full member of the EU. The study analyses, in addition, the possible repercussions of Brexit for the access of UK-based entities to EU funding streams.

The purpose of the study is to provide citizens with a comprehensive analysis of the potential consequences of Brexit for citizens’ rights and to enable citizens and civil society to advocate for the best possible Brexit for them.