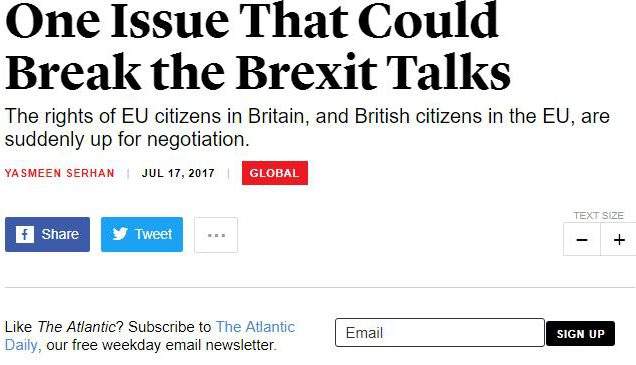 ECAS appeared in The Atlantic on July 17, in an article on the issue of citizens’ rights “looming” over the Brexit talks. Senior Manager, Programmes and Fundraising, Kenan Hadzimusic, told The Atlantic that a lack of clarity about how citizens’ rights would be affected by Brexit was a cause for concern for UK and EU citizens.

Pointing to ECAS’ Brexit survey findings, he said that free movement rights were the primary concern for both groups, but UK citizens were more concerned about losing their EU citizenship and EU citizens more concerned with uncertainty about the future, xenophobia, and discrimination.

What will be much fairer and easier would be to in fact look at those rights that [EU citizens] have acquired and keep them, and have a reciprocal solution for the U.K. citizens living in other countries of the EU.

That is what the European Union Commission negotiating team is also proposing. It will have an affect on people’s lives and their professional career, possibilities to study or not in other countries, to live with their spouses.