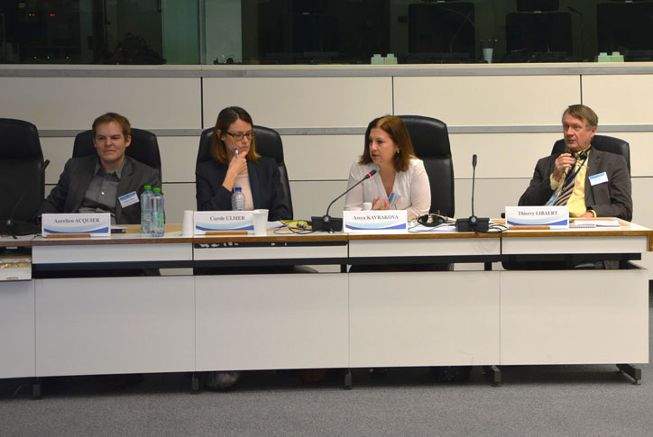 On March 7, ECAS’ Director, Assya Kavrakova, called for an enhanced digital democracy for the EU in the European Economic and Social Committee’s (EESC) ‘Towards a Sustainable Europe’ debate.

In her intervention in the debate, on the digitalisation of society and the transition to a new economic model, Ms Kavrakova addressed the impact of digitalisation on the future of democracy and elaborated on the transformative power of e-democracy to reshape our political institutions.

Since citizen engagement tools in the EU are “limited in quantity and efficiency”, e-participation methods such as ‘crowdsourcing’ have the potential to enhance participation, strengthen political legitimacy and restructure the relationship between decision-makers and citizens into more of a partnership.

Along these lines, MEPs backed a report by rapporteur Rámon Jáuregui Atondo on 16 March on e-democracy in the EU, supporting greater use of internet voting and e-participation tools as a way of enhancing traditional methods of participation, widening inclusion and reinforcing democratic processes.

In a series of recommendations on using ICT to improve the EU’s democratic systems, Parliament backed the promotion, support and implementation of participative instruments, as well as greater experimentation with e-participation tools. To this end, Parliament should “take the lead” in reinforcing e-democracy and develop technological solutions for citizens to communicate meaningfully with their representatives.

The stand-out mechanism for this is ‘crowdsourcing’, which would harness the ‘wisdom of the crowd’ to enable citizens to interact with government, and the report calls for pilot projects to be launched from local to EU level.

The report further calls on the Commission to reform the European Citizens’ Initiative to enable it to reach its full potential, use the mid-term review of the Digital Single Market Strategy to expand and develop e-participation, and emphasises the importance of access to information, digital literacy and a high-speed internet infrastructure.

Potential and challenges of e-participation

The Parliament’s e-democracy report is largely based on the findings of ECAS’ study for the AFCO Committee ‘Potential and Challenges of E-Participation in the European Union’, which recommended that the EU “both improve existing e-participation tools and foster new ways of e-participation”. This would bring significant benefits, including “enhancing participation and active citizenship”, “engaging young people in policy-making”, ensuring innovation in policy-making and increasing “political trust and legitimacy”.

ECAS’ work in this area also includes EUCROWD, a project aiming to introduce a crowdsourcing pilot at EU level, and DEEP-Linking Youth, which is using e-participation and developing a digital dashboard to listen to young people’s opinions on EU policy-making.