Home>Publications>5 Takeaways on Brexit: No ‘Best Alternative’ to EU Membership for Citizens’ Rights

5 Takeaways on Brexit: No ‘Best Alternative’ to EU Membership for Citizens’ Rights 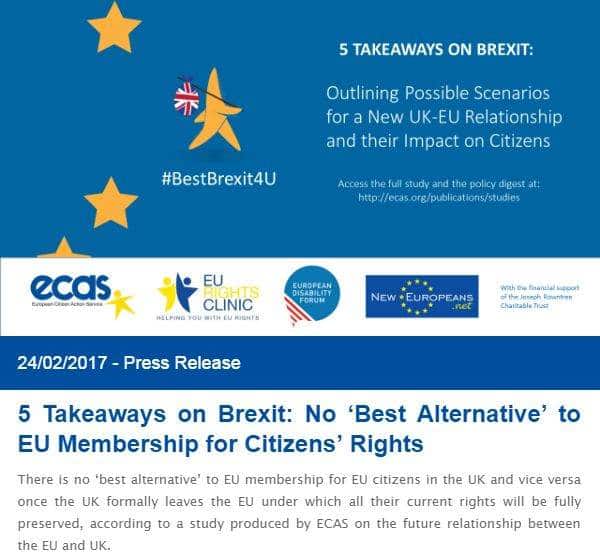 There is no ‘best alternative’ to EU membership for EU citizens in the UK and vice versa once the UK formally leaves the EU under which all their current rights will be fully preserved, according to a study produced by ECAS on the future relationship between the EU and UK.

A choice, therefore, will have to be made during the negotiations about which rights to retain for the more than 4 million EU and UK citizens directly affected by Brexit.

In all of the models analysed, covering the EU’s relationships with Norway, Switzerland, Canada and Turkey, residence and political rights, the right to non-discrimination and access to EU institutions will either be restricted or removed altogether, whilst the ‘hard’ Brexit models – Canada and Turkey – will also either limit or remove the rights of entry, to work, to do business and provide services, and to social security, as well as consumer protection and passenger rights.

Of all the scenarios considered, the ‘Norway model’ of EEA membership offers the best possible deal for citizens as it would allow them to retain most of the rights they enjoy today, while allowing the UK to retain full access to the EU’s Internal Market. The second best option would be Switzerland’s model based on bilateral arrangements, which would oblige the UK to essentially preserve freedom of movement rights, albeit with some potential limitations.

Whatever choices are ultimately made, however, the future relationship between the UK and the EU should be arrived at in close consultation with citizens, social partners and elected representatives, and should not be driven solely by governments without sufficient regard to the concerns of those who will be most affected: the citizens of Europe.

Read the full press release
Access the full study
Access the policy digest (a translation will be soon available in DE, ES, FR, IT, PL and RO)