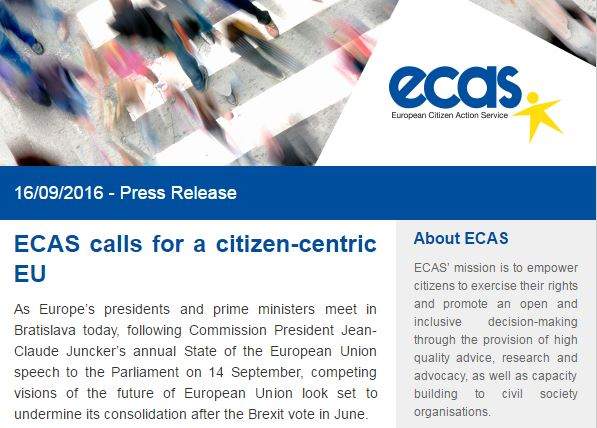 As Europe’s presidents and prime ministers meet in Bratislava today, following Commission President Jean-Claude Juncker’s annual State of the European Union speech to the Parliament on 14 September, competing visions of the future of European Union look set to undermine its consolidation after the Brexit vote in June.

Whilst Juncker talked of the EU still not having enough Union, Council President Donald Tusk, in a letter to the EU’s heads of government, has spoken of “more responsibility for the Union in national capitals.” Although they agree on the need to “empower” Europe’s citizens (Juncker) and the “urgent necessity” of rebuilding citizens’ trust (Tusk), their methods of achieving these aims are pulling in opposite directions – further integration versus the renationalisation of powers to Member States.

Moreover, divisions amongst Member States risk further discord. The crises of Brexit, security and migration threaten the very values on which citizens’ rights are founded. Competing ideas of a liberal and illiberal Europe, East-West friction over workers rights, the EU’s inability to address the refugee crisis and concerns over terrorism, security and globalisation are obscuring a vision of Europe that engages with its citizens, delivers tangible benefits and gives its people a stake in their future.