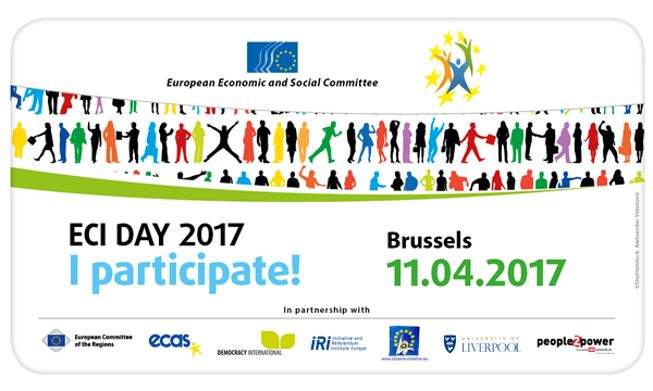 The concept of European citizenship has been evolving for 60 years, ever since the Treaty of Rome made history by introducing the right to freedom of movement for workers and services. Over the years, the idea of European citizenship and the rights associated with it have evolved considerably – more freedoms were added, as well as the right to vote directly in European Parliament elections, online consultations and other tools of participatory democracy, such as the European Citizens’ Initiative.

With this in mind, 2017’s edition of the “ECI DAY: I participate!” hopes to bring to light the success stories that attest to the considerable evolution of the concept of European citizenship, as introduced by the Treaties, and the kind of policy-making that engages citizens, but also to identify where the democratic deficits lie. Our aim is to underline the value of active citizenship and personal involvement, as well as the importance of citizens’ informed and conscious use of the democratic tools that are available.

The 2017 edition of the ECI DAY will focus on the following themes:

Our Digital Democracy Manager, Elisa Lironi, will participate as a speaker in the second panel on citizens’ participation, together with an ECI organiser, academics and a social entrepreneur on civic engagement. This panel will address new forms of citizen participation that complement the ECI, including improved EU policy consultations, EU civic education or online crowdsourcing.

More information about the programme and registration

The ECI Day is an annual meeting where registered and future ECI organisers and stakeholders can exchange information and experiences and present their ECI and activities to the public. The event is jointly organised by the European Economic and Social Committe (EESC) and several partners, including ECAS, Democracy International and the Initiative and Referendum Institute Europe, which jointly provide the ECI Support Centre. The first ECI Day was organised in 2012, shortly after the ECI Regulation entered into force. In the last two years the ECI Day has evolved into an annual event dedicated to new forms of citizen participation, including but not limited to the ECI.