U-Impact Debate in Tallin: The Voice of Citizens in the European Refugee Crisis 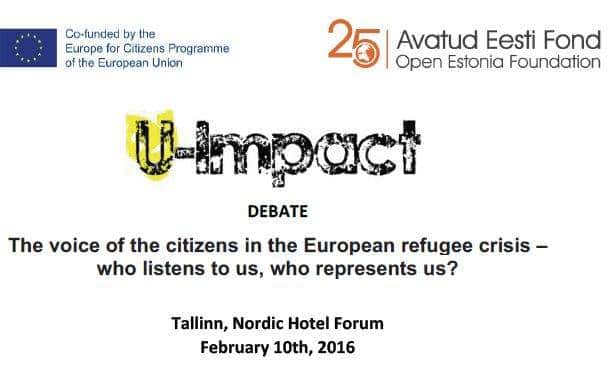 Our partner in Estonia, Open Estonia Foundation, is organizing a public debate entitled ‘The Voice of the Citizens in European Refugee Crisis – Who Listens to Us, Who Represents Us?’ on the 10th of February in Tallin (Estonia). The event will focus on the role of the EU institutions in solving the refugee crisis and the extent to which the voices of citizens have been heard and considered (if at all) in this process. The discussion that will follow will also provide recommendations on how policy-makers and citizens can work together to better address future crises.

This debate is organised under the U-Impact project – a project launched in April 2015 and implemented by 9 partners which aims at fostering a meaningful debate with policy-makers and at creating mechanisms for turning citizen involvement into effective impact on EU policy.

It follows up on the ACCES Initiative – Active Citizens for Common European Solutions, a citizen initiative launched by the partners of this European project in September 2015 which called on EU institutions to engage with citizens and civil society organizations in both the EU and the accession and Neighborhood countries in the discussions and initiatives undertaken to address the migration crisis.

Registration & Agenda
For more information about the event contact: Andrei@oef.org.ee

More information about the project