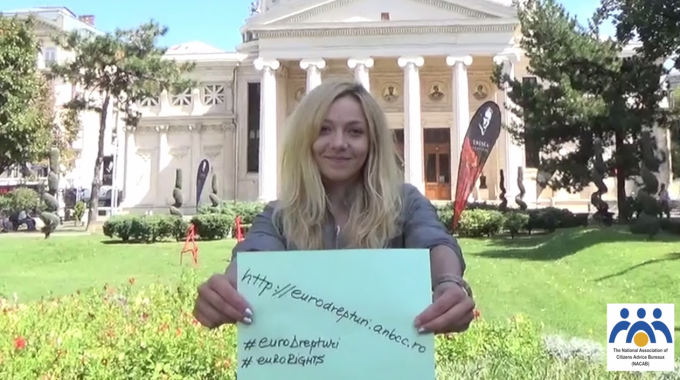 In the heat of the refugee crisis, a cross-border citizen debate on the freedom of movement dilemma facing European citizens and EU leaders is being organised in Romania in the framework of the U-Impact project, in which ECAS is a partner.

On September 18 our Romanian partner under the U-Impact project, the National Association of Citizens Advice Bureaux (NACAB), will host a second national debate, entitled ‘EU Citizens’ Rights Abroad: Know your rights and act upon them!’ following the first one which was organised in Sofia (Bulgaria) in April 2015.

The focus this time will be on active civil society involvement in the political debates about the refugees, European solidarity and free movement, given the topicality of these issues in recent times (see the agenda here). The U-Impact initiative which will be announced at the event aims at getting citizens from the EU, the candidate countries and the European Neighbourhood actively involved in the ongoing debate about freedom of movement and solidarity in Europe. You may already express your support to this initiative by endorsing our letter which will be sent to Members of the European Parliament. How to endorse it? Fill in this online form stating your support!

Cannot make it to Romania? You can watch the debate live from 9am CET at: http://www.eurodrepturi.anbcc.ro/. We are looking forward to your participation!

The project “From Citizen Involvement to Policy Impact” (U-Impact) coordinates citizen involvement with decision-makers at national and European levels in eight EU Member States and one candidate country in order to create an inclusive, long lasting network for policy debate and impact involving citizens across borders building on their cultural diversity and promoting the development of a common European public space. The project builds on the positive experience of the partners in the implementation of the project “Joint Citizen Action for a Stronger, Citizen-Friendly Union” (JoiEU), under which participants have debated and developed policy recommendations in several areas related to European citizenship. U-Impact fosters a meaningful debate with policy-makers, including the European Parliament, and helps create mechanisms for turning citizen involvement into effective citizen influence on EU policy.