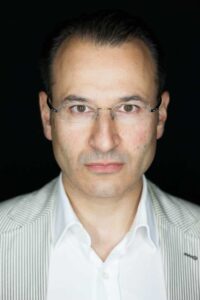 Andrei Tarnea is a trustee of Aspen Institute Romania and currently serves as the Executive Director of the Institute.

He is a career diplomat having served 14 years in the Romanian Ministry of Foreign Affairs including as head of the early warning unit in the policy-planning department and as policy advisor to the foreign minister. Previously he worked for the Centre for Policy Studies and Comparative Analysis, and co-led a political and social affairs think tank. He also worked in the private sector and the Romanian Senate. He was on foreign posting in Brussels between 2004 and 2010.

Andrei Tarnea studied clinical and social psychology in Bucharest. He holds a graduate degree in political science at the National School for Political and Administrative Studies and a master in international law and security studies from the Fletcher School of Law and Diplomacy. He regularly publishes analysis and commentary on foreign policy in Romanian media and international publications. He serves in the advisory council of the Romanian Ministry of Energy and consults public, civic and private institutions on matters of policy. Besides his native Romanian he speaks fluent English, French, and Hungarian. Andrei Tarnea is married to Andra Teodora Tarnea.