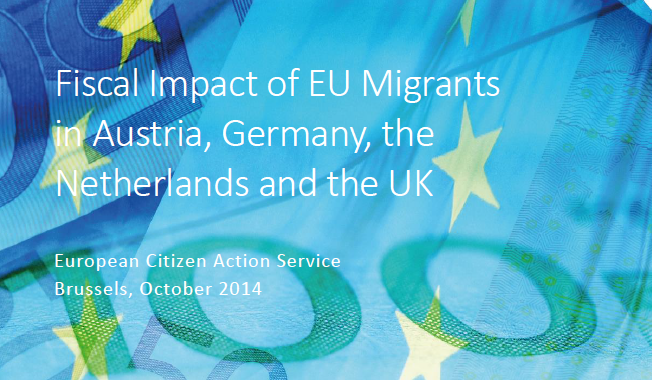 During the period 2007 – 2013, in all four countries, EU migrants made a positive contribution to the state budget, with the total taxes they paid exceeding the total benefits they received by between 0.2 and 0.9% of GDP depending on the country. Even when pension-related benefits and contributions are not taken into account the net positive contribution remains for Austria, Germany and the UK, with this balance turning slightly negative for the Netherlands alone. These results are according to a new report from the European Citizen Action Service (ECAS), which will be presented today in the European Parliament and discussed by a wide spectrum of political parties.

The study was launched in response to threats by some Member States to restrict the right to free movement of people in the EU.

Despite the fact that some Member States label EU migrants as being burdens to their social security systems, the study shows that the data available do not support these arguments.

“The EU should call on the Member States to collect harmonized data on the impact of free movement in their respective countries if we are to have an evidence-based debate on this issue” remarked Assya Kavrakova, ECAS’ Director.

Based on the evidence of this study, ECAS has formulated the 4th Strategy of the “Right To Move” campaign, calling on Member States to collect disaggregated data on free movement in a systematic way across the EU in order to feed an informed debate on its impact.