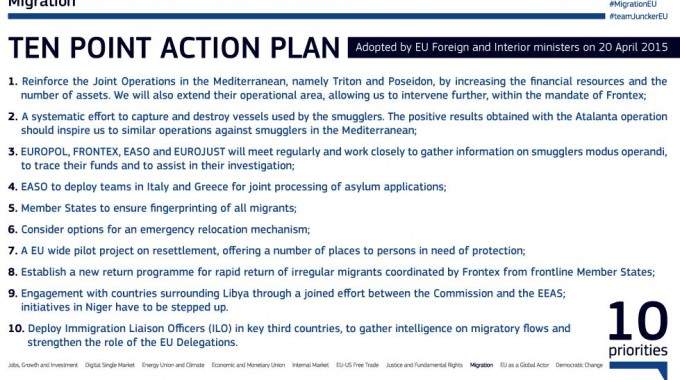 The headlines have been impossible to avoid; one tragedy piling up on another.

First, the news on April 12 of up to 400 deaths following the capsizing of a boat of refugees trying to cross the Mediterranean for the safety of Italian shores. Then on April 19, another boat, another capsize, another 700 deaths…perhaps more. The month is now being hailed as “the deadliest on record”.

So what response from the EU? How would it react to this disaster at its borders? Well heads were shook, and “never agains” were uttered, and before you knew it we had a 10 point action plan from the Foreign Affairs Council and an extraordinary summit of the European Council to discuss the crisis. Was this to prove a turning point for the EU and its policy towards refugees?
Not too fast.

The headline announcement from the Council’s extraordinary summit was a tripling of the financial resources for the Triton and Poseidon missions which currently monitor the Italian sea borders, allowing their ships to perform more search and rescue operations and respond to more migrant boats in distress. But those with slightly longer memories will remember that these missions were themselves the EU replacements for the Italian led “Mare Nostrum” search and rescue operation which was discontinued in October 2014. And they may even remember the controversy surrounding these replacements when it was announced that they would have only a third of the budget of the “Mare Nostrum” mission.

So this headline tripling of the Triton budget in fact only returns us to the status quo of 2014; a year in which 2447 migrants died in the Central Mediterranean, attempting to make the crossing. What is more, the Council failed to announce any extension of the operational area of the Triton mission, meaning that the high seas, where most of the deaths have occurred, will still not be covered by search and rescue missions. This failure has been criticised in the strongest of terms by human rights groups, including Amnesty International. Meanwhile the UNHCR has urged the EU to “move beyond emergency mode” and develop a more comprehensive response.

The “Mare Nostrum” mission was initially cancelled amidst arguments about reducing the “pull factors” drawing in boats of migrants. The idea was that migrants were agreeing to the trip because they were confident that if the worst came to the worst there would be a European boat there to save them. Six months later and it seems clear that “push factors” in the countries of origin have rather more to do with the decision to make the risky trip and European moves to make the journey yet more dangerous have had little deterrent effect. These “push factors” however involve complex geopolitical issues and are unlikely to be resolved quickly.

The EU should do more to prevent that such catastrophes happen by saving lives instead of only financing border-control missions, such as Triton.