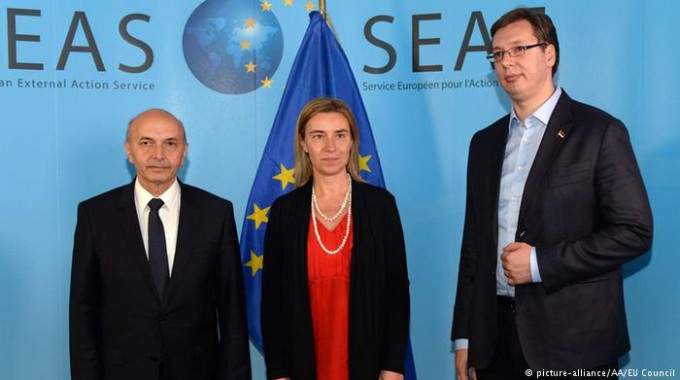 A “landmark” agreement between Serbia and Kosovo was reached on 26 August 2015. This agreement, guided by the EU’s foreign chief Federica Mogherini, is expected to bring a new era in the relations between the two countries whose constant feuding has been a deterrent from their accession to the EU.

The tension dates back to Kosovo’s split from Serbia in February 2008 when they claimed their independence as the Republic of Kosovo, following a war that lasted from 1998 to 1999. Serbia has since come to recognize the province’s government, though they refuse to validate their legitimacy as an independent country, claiming that they are still a territory of Serbia. The new compromise involves Serbia’s government acceptance of Kosovo to act as a sovereign state, and the establishment of their own international dialing code. Kosovo, in return, promised adequate representation for ethnic Serb populations in the 10 major areas under Kosovo control. Serbs will be able to manage their own local issues such as education and the economy—all while receiving additional financial assistance from Belgrade. The municipalities will be able to form their own assembly with a president and their own flag.

Perhaps just as important as the improving relationships between Kosovo and Serbia are the effects that their cooperation can bring with regard to their prospects for EU membership. The establishment of this agreement has lifted the main obstacle that was barring Serbia from reopening accession negotiations with the EU. Serbia’s accession to the EU formally began in January 2014, in the framework of an intergovernmental conference, though no official talks had in practice begun—due in large part to its relationship with Kosovo. Several countries in the EU, including Germany, emphasized the need for Serbia to comply with the 2013 Brussels Agreement, which was the first step in normalizing relations with Kosovo before they could begin negotiations. The new agreement, which is a definite step in the right direction, is not enough to resume the accession talks immediately however. A source tells the EU Observer that the EU would wait for the annual progress report to be released in October before there is an official decision to begin talks. However, if the report presented to the EU is encouraging in the direction which Serbia is heading, then the EU Foreign Ministers will vote on whether or not to begin the accession process with Serbia, which has had a “candidate country” status since March 2012. Kosovo’s accession to the European Union is anticipated to take a longer time than Serbia, mostly because the country faces the issue of not being recognized not only by Serbia, but by several other EU member states. Currently, Kosovo holds the membership status of a “potential candidate”.

The process, however, could take years. European Commission President Jean-Claude Juncker already declared when he came into his term that “there will be no enlargement in the next five years”. The goal of the Serbian authorities, however, is to become a member of the EU by 2020.

Regardless of the timeline, the agreement reached between Serbia and Kosovo is a definite step in the right direction towards a future for both countries in the European Union, and is also a much needed step towards normalizing their relations. The agreement, which took place just a day before the Western Balkans Summit held on 27 August, was clearly intended to send a message to the EU about Serbia and Kosovo’s accession aspirations. The Summit, which also extensively discussed the refugee crisis, was intended to show continued support for EU accession to the Western Balkans countries. While all of the Balkans countries must meet the criteria for EU membership before being considered, the Summit’s goal of establishing regional cooperation and connectivity was definitely reached—with the Balkans countries pledging to work to resolve all pending bilateral issues, and support the accession of their neighbours into the EU.