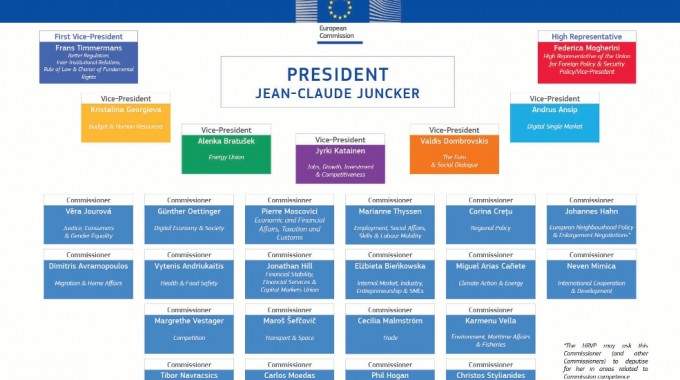 On the 10th of September the president-elect of the Commission, Jean Claude Juncker, announced his Commission nominees and portfolios.

The announcement was just the first step in a lengthy process. On the 7th of October, the second step in the process, the European Parliament hearings, concluded. It is now time for the MEPs to deliver their judgment. The final EP vote to accept or reject the Commission team will be held on the 22nd of October and, if approved by the EP, the Juncker team will enter office on the 1st of November.

Parliament approval is not guaranteed, however. Background, political affiliation and sensitive portfolio assignments made several nominees controversial. On the eve of the hearings, media analysts warned that many nominees were likely to encounter trouble during their “job interviews.” Their predictions have proven to be accurate as several nominees have met resistance. A second hearing has been scheduled for the Commissioner-designate in charge of the financial services, Jonathan Hill. Hill and three others have been asked to submit written answers to post-hearing questions of the MEPs. The three others include Vera Jourova (Justice, Consumers and Gender Equality), Tibor Navracsics (Education, Culture, Youth and Citizenship) and Pierre Mosckovicki (portfolio Financial and Economic Affairs merged with Taxation and Customs Union). As of the 6th of October, Tibor Navracsics’ portfolio assignment has been officially rejected.

In addition to the strong opposition facing some Commission candidates and their assignments, many concerns have been raised regarding changes in Commission structure and portfolios. In the new system, Jean Claude Juncker will have seven deputies who will each preside over a policy area cluster of Commissioners. A single Commissioner may be assigned to more than one cluster group but a deputy will only preside over one. The idea is that by coordinating Commissioners into common groups or “clusters,” a stronger cooperative spirit will be fostered within the institution. Juncker hopes to overcome internal divides by rallying the Commissioners to work together. The changes are also likely to increase the hierarchical nature of the institutional body since they will give certain Commissioners, the seven deputies, more power than others.

Mark Rhinard, the head of the Europe Research Program at the Swedish Institute of International Affairs (UI), considers that this hierarchical approach may actually lay the basis for new problems rather than solve the existing ones. Rhinard predicts that the Commission cluster will not guarantee policy coherence but will more likely push commissioners to bypass the Vice-president in search of more opportunities. He warns that the cluster approach could thus counterproductively undermine the basic principle of collegiality within the Commission which is a “source of strength vis-à-vis other institutions.”  Some of the Commissioner-designates showed sympathy over the collegial manner of work in the Commission. “There is no ‘super-commissioner’, no ‘second tier’ of commissioners. We are all equal, a team formed to pull in the same direction,” said Moscovici. “We are to respect each other’s mandates,” explained Vice-President-designate Georgieva. “I will work closely with all Commissioners as equals within a real College,” promised the nominee for First Vice-President, Timmermans, in his written answers preceding his hearing.

Similarly, many have critiqued the new portfolio structure. Most notably, critics have raised concerns and criticisms over the mergers of “Environment” with “Maritime Affairs and Fisheries” and “Climate Action” with “Energy”. Green 10 sent an Open letter to the Commission President-elect Juncker on the topic. The environmental organization believes that the new Commission portfolios represent “a serious downgrading” of environmental priorities and a “roll back of EU commitments” in this policy area. To further examine these claims and concerns, the European Parliament has asked the Legal Affairs Committee to provide their legal opinion on Cañete’s declaration of financial interests.

For context and comparison, recall the hearings of the Barroso I and II Colleges when several nominees had to be withdrawn and replaced. In 2004 Rocco Buttiglione was withdrawn because of his conservative views. In 2009 it was Rumiana Zheleva because of what was considered to be an “unconvincing performance”. The Juncker 2014 team has seen its share of challenges as well, most recently with the formal rejection of Navracsics. Only time will tell what the final composition of this contentious team will be.