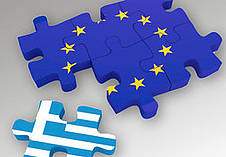 On the eve of the deadline (June 30) for the repayment of Greek loans  to the International Monetary Fund (IMF) to avoid a Greek default, EU Economics Commissioner Pierre Moscovici announced that the “door is still open for negotiations on latest EU Commission proposals,” defending the position that Greece should not abandon the Euro.

The current offer of releasing the final bailout package at the amount of €7.2 billion still stands on the table provided that Greece commits to the following austerity measures, including but not limited to:

As a response to the proposed austerity measures, during an interview with Tagesspiegel, Greek Finance Minister Yams Varoufakis criticized the Troika for “making no concessions and turning the negotiations into a war” by putting pressure on Greece to extract financial resources through tax and pension cuts. Varoufakis makes the analogy that applying such measures would be like beating a sick cow in order to produce more milk, hence killing it. He declares that Greece is firm in its two requests: a) debt restructuring and b) investment package from the European Investment Bank (EIB). Currently, Greece owes €27 billion to ECB and €1.6 billion to IMF, the latter of which is due today, June 30th.

Alexis Tsipras, the leader of the anti-austerity party Syriza called for a referendum on June 27, due to take place on 5 July, rejecting the final bailout package and further austerity measures proposed by the creditors. Yet for weeks thousands of Greek citizens have been putting on anti-Syriza demonstrations in Syntagma Square chanting “Yes to the EU, no to isolation” and “Greece-Europe-Democracy”, opposing any action by Tsipras’ Government that could lead to a permanent exit out of the Eurozone. Despite the possibility that the Hellenic country might end up leaving the EU is looming more than ever, French MEP Alain Lamassaoure has clearly stated that “EU’s divorce clause” –a term coined by himself during the 2003 Convention that was supposed to result in a Constitution for Europe –  isn’t made for Greece, but it was rather created as a trump card against nationalist parties in Britain, neutral and northern member-states who may not want to opt for an ever-closer union.

Europe’s financial situation is continuously framed as a Greek Crisis despite the fact that Greece only accounts for 2% of the Eurozone economy. Nonetheless, given the deep integration of European markets, it is without a doubt that a Grexit would have irreversible consequences on the European market, thus impacting all EU citizens. European stock markets have already hit their lowest level since February and “the risk premium on bonds of other vulnerable euro zone states leapt in one of the sharpest episodes of contagion since the height of Europe’s debt crisis in 2012.” More importantly, such a scenario is also likely to have a spill-over effect on the neighbouring economies, sending out the message that the European Union is in decline and it is no longer the attractive project it used to be – neither for the countries next in line for accession, nor for the ones that are EU Members but have not yet joined the common currency.

On March 20, The European Commission had made available additional funds to Greece calling the crisis a humanitarian one and allowed a four-month loan extension. At which point, Commission President Juncker proposed €2 billion assets in structural funds to help alleviate poverty. For the following four months, the positions of neither party have changed. While the Troika pressed for austerity measures, Tsipras demanded debt restructuring and an investment package. The Eurogroup meeting held in Luxembourg on June 18 seemed to be the final chance for Greece and Institutions to agree on the proposal for a bailout package at the amount of €7.2 billion as the second tranche. Yet, the failure to reach an agreement called for an emergency Eurosummit over the weekend. Despite feeling betrayed by the Greek Prime Minister’s reluctance to reach a new agreement on austerity measures, Juncker reiterated the firm stance taken by the Commission that a walk back is always possible and the door is still open to talks.

Meanwhile, a crowdfunding campaign started by a British citizen, Thom Feeney, has been launched to   support the Greek citizens in this critical period.  The aim of this campaign is to raise funds for a bailout for Greece. Within three days, Feeney was able to raise over €821,000, falling however short of the €1.6bn needed for a bailout.

Amidst the ongoing political war between the Troika and Syriza, EU citizens are clearly the net losers. Greeks are forced to live with high unemployment, pension cuts and now €60 limit on cash withdrawals after Tsipras took measures to close the banks. Moreover they are faced with the burden of responsibility to accept or reject on the July 5 referendum the agreement plan put forward by the troika that may no longer be valid by the time when the referendum takes place. And yet this popular vote is likely to have a dramatic impact on the lives of all EU citizens –not only of the Greeks- and most of all on their own quite unclear in terms of feasible alternatives future destiny after a potential Grexit.