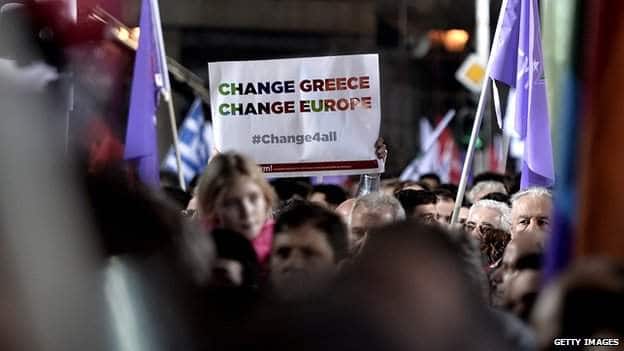 With an election victory falling only two seats short of an absolute majority, the newly elected Greek Prime Minister Alexis Tsipras has vowed to renegotiate Greece’s international bailout and put an end to the austerity measures imposed on his country since 2010.

With a national debt currently equal to 175% of its GDP and an average 40% drop in the purchasing power of its citizens over the past five years, the Hellenic country is at a crossroads and its population has called for change in the general elections held on 25 January.

The victory of Tsipras’ left-wing party, Syriza, has been seen by many as an opportunity not only for Greece, but to re-think the European socio-economic model as a whole, by challenging the measures adopted to counter the economic crisis that have proved unsuccessful so far, and by offering an alternative to the rise of far-right parties across Europe.

Several Southern European countries, having undergone painful reforms and adjustment programmes in the past years, with the so-called ‘troika’ overruling their national sovereignty, see Syriza as a model to follow. The Greek campaign was closely followed in particular in Spain, where the barely year old left-wing party ‘Podemos’ is becoming increasingly popular and could challenge the bipartisan political system that has prevailed in Spain since democracy was restored in the late 70s. In fact, Syriza’s campaign was directly supported by Podemos, whose leader and MEP Pablo Iglesias labelled Tsipra’s victory as the “beginning of the change in Europe” (see article in Europa Press), and Syriza’s electoral victory has given wings to the Spanish movement (see article in EUObserver). Leftist parties in Portugal, grouped into a recently founded political movement called ‘Tiempo de Avancar’ also hope for the same political momentum that Syriza achieved in recent general elections in Greece (see article in EUObserver).

Yet euphoria in Greece is likely to be short-lived, or at least significantly softened. Despite the Greek Prime Minister’s electoral promise to write off the Greek debt, the response from European leaders has been quick and crystal clear. European Commission President Juncker has stated that there is “no question of cancelling the Greek debt”, as the other Eurozone countries would never accept it. He has called on Athens to “respect Europe” and the system in place, which can be rearranged, but not fundamentally changed (see article in EurActiv).

Meanwhile Tsipras has scheduled several meetings with EU leaders in the days ahead of the upcoming European Summit on 12 February to persuade them to come to a new debt agreement with Greece. Whist Germany has been very assertive in pushing Greece to meet all its bailout obligations, some other EU leaders are showing more flexibility regarding alleviating the Greek burden, leaving the door open to options that could include giving Athens more breathing space for repayment (read article in EurActiv). The outcome of the negotiations is unlikely to be a write-off of the Greek debt, but rather a renegotiation of its current terms. However, these negotiations may lead to a new approach to austerity in the Eurozone as a whole.