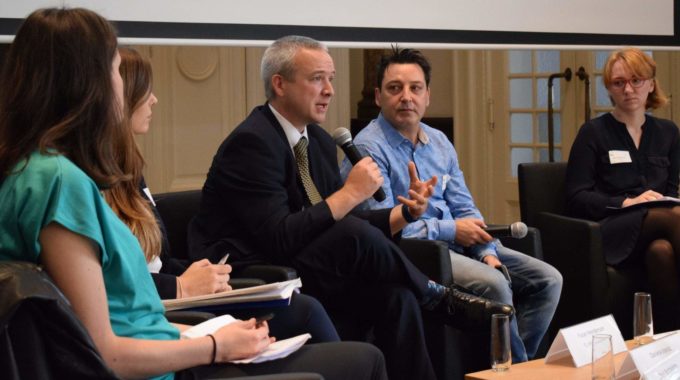 On 17 October 2017, ECAS held its third annual Digital Democracy Day – Rejuvenating Europe: Opportunities in the Digital World – focusing on identifying the most common challenges to youth participation in European policy-making and proposing several concrete solutions to them by using digital tools.

The event represented the final conference of the Erasmus+ project Deep-linking Youth, a partnership between ECAS and six other organisations, in order to explore and test out different ways of engaging young people in the EU’s democratic life.

Over 110 participants took part in the conference and the event has been viewed over 6,700 times online. We were joined by Villu Varjas of the Estonian Presidency of the EU and MEP Brando Benifei, along with a number of distinguished speakers who are experts in the fields of youth engagement and digital democracy.

Many ideas were discussed about the reasons why young people don’t engage in politics and possible ways of bringing them into politics and policy-making, including media literacy, financial incentives, e-voting and lowering the voting age to 16.

ECAS’ Executive Director, Assya Kavrakova, said at the end of the event:

We know what we have to do next. The tools are in place. There is an understanding that we have to experiment more, and it is the responsibility for us – not-for-profit organisations and European associations – to act as mediators between citizens, and young citizens, and decision-makers.

Our next step will be to set up a pilot of crowdsourcing, co-deciding with citizens, and also to use the Digital Dashboard as a complementary tool to listen to those citizens who are not actively involved in politics.