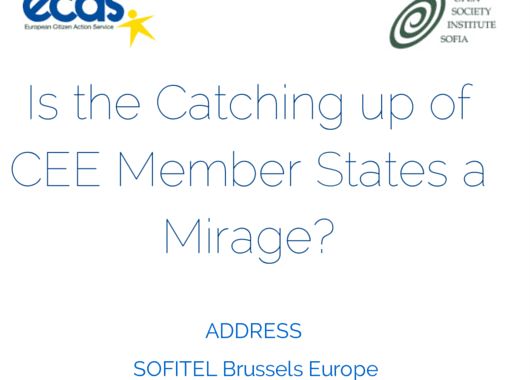 A decade after the fifth enlargement of the EU, new Member States are catching-up with regards to the economy, though they still lag behind in terms of democracy, governance and quality of life.

Central and Eastern Europe Member States are advancing in terms of their economies, with Estonia establishing itself as the new leader in the region. This is as according to the key findings of the fourth Edition of the Catch-Up Index which were discussed by a panel of experts during the policy debate “Is the Catching-Up of Central and Eastern Europe (CEE) Member States a Mirage”, co-organized by ECAS and OSI-Sofia on the occasion of the 10th anniversary of the fifth enlargement of the EU.

The Catch-Up Index measures the performance of 35 countries, comprising the EU Member States, and the candidate and potential candidate countries, across four categories: Economy, Quality of Life, Democracy and Governance.

Although the Index shows four consequent years of positive developments in the region, only a few CEE Member States can yet be compared to the best-performing countries on selected indicators. The Baltic States, in particular Estonia and Poland are the most dynamic performers in the 2014 edition. By contrast Slovenia, Hungary and Croatia are declining.

Dr. Pogatsa, from the Faculty of Economics at the University of Western Hungary emphasized: “It is true that Estonia, Slovakia and Poland have reached the GDP per capita of Portugal, however, the incomes level of those countries is only half of the Portuguese level. It is clear that the Catch-Up Index is useful because it makes an implicit European model explicit.”

“In the past decade the financial support for energy efficiency projects has increased, however, strangely enough transforming the energy system is not yet a priority for CEE countries” added Marcus Trilling from CEE Bank Watch.

“Governance remains the key challenge for most of the CEE countries. Policy-making is often done in force majeure situations, without proper impact assessments and quality debate”, added Dace Akule from PROVIDUS.

“The most striking pattern is a New Central Europe with fairly new democracies which are flawed, functional and in progress, which does not depend on the shared legacy of communism. It will be interesting to see whether this new Central Europe is just a transitional phenomenon”, commented Dr. Sean Hanley, Senior Lecturer in Comparative Central and East European Politics, UCL School of Slavonic & East European Studies.

“As a European association working directly with citizens, the European Citizen Action Service (ECAS) is interested in exploring the catching up process of CEE MS beyond considerations just of GDP per capita. The costs and benefits to the everyday life of the EU citizen is what matters at the end of the day and we’ll continue identifying new and innovative instruments that can help us measure progress and trigger an informed debate”, concluded Assya Kavrakova, Director of ECAS.

Presentations and material from the event